Back when Hasbro held the Batman license a little cartoon made a debut called Batman the Animated Series. Hasbro not missing a beat released some of the best all around Batman figures ever. These things were spot on to the cartoon, well with the exception of all the multi colored bat suits with skis and jet packs and the like. Combat Belt Batman was the only way you were getting a "regular" looking Batman from the cartoon in the sea of goofy Suit Batmans. 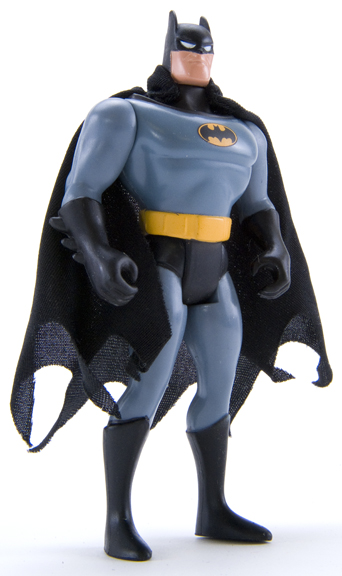 This Batman not only combines the look of the show, but has a pretty cool play feature, that actually makes sense, the utility belt! If you didn't feel like wearing the Combat Belt, you could remove it and not ruin the look of the figure.

So what comes on a Combat Belt. You get the standard issue humongous grappling launcher with rope and hook, you also get a bat-a-rang that fits into the launcher and has a storage loop on the belt, plus you get a neat little set of Bat-Cuffs for apprehending Gotham City's Goons.

Combat Belt Batman is by far my most treasured Batman in my collection. You know that question people ask, what is the one item you would grab in an emergency? Well besides the Family and Pets, Vintage Boba Fett, and the family pictures. Combat Belt Batman is right there with them. Of coarse I might have to grab his Batmobile as well, especially if that's were he is at at the time, no time to stop and think about these things...
Posted by chunky B at 8:03 AM

the animated line was one of the most complete and accurate sets and at the helm was Comabt Belt Batman, who seemed like he was yanked right off the TV screen!

As you stated, besides the gratuitous dayglo Bats, the animated line from beginning to end, with few exceptions, was and still is the most comprehensive, complete, and wide reaching Batman toy line ever.

That sentence has a lot of commas.