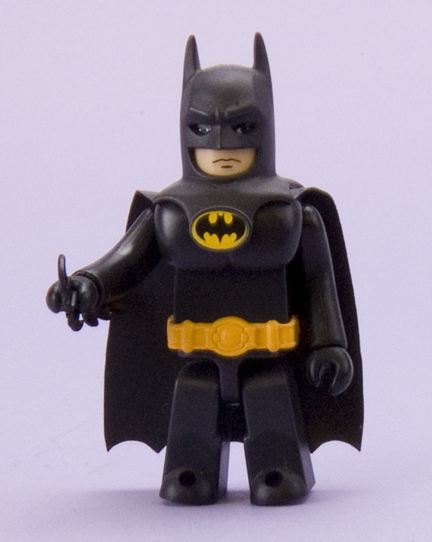 Seems like I have a nice little Batman groove going, So why not continue with a little Batman? This is none other than the 89' Batman in the fun little Kubricks style. Kubricks is a toy line from Japan, from a company called Medicom. I have to say they make some of the coolest stuff. I hope to feature some more Medicom wares in the future. These toys are under 3 inches in height and all share some basic features, such as the same shaped head, basic body, arms, and legs. I guess these would be close to Lego mini figs, a little bigger, and I like to think these were the inspiration for Minimates from Art Asylum. I do have a few examples of Kubricks with sculpted heads and not the standard cylinder, these are mainly animal type characters, the ones I have include Bruce Lee. I'm guessing that they needed to have a better likeness of Mr. Lee than the cylinder could reflect, though Art Asylum did a pretty good job with their version.

Medicom has run the gamut with these guys. They cover popular Japanese properties like Astro Boy, Neon Genesis Evangelion, Shin Getter, and even a set from the cult classic Battle Royal. They didn't stop there though, they started hitting the American licenses as well, Edward Scissor Hands, Planet of the Apes, Back to the Future, Star Wars, and of course Batman just to name a few.

So far as I can tell they have covered Batman with assortments from the following eras of the Dark Knight; Batman the 1989 Movie with some Batman Returns thrown in, Batman The Animated Series (including a couple Batman Beyond characters), The comic book style Batman, and finally the more recent Batman Begins Movie. I'm still working on getting most of these, but to date this 89' Batman is my favorite of the Batman Kubricks.
Posted by chunky B at 11:30 AM

You know, I love the Kubricks and the Minimates....but my budget doesn't usually allow for them, sadly. I have a few pieces, but its not much!

They're wonderful designs, though. Especially the Batman Beyond and New Batman Adventures versions!

The price on the Kubricks are crazy now, I think this Batman is one of the last ones I bought. I still do not have any of TNBA stuff. When I started collecting these there were maybe two pages on e-bay at the most and the ones I found at toy shows were being cleared out because no one was into that type of stuff. My Bruce Lee set I paid under 10 bucks for. Not now.