I have been cleaning up my home workspace. It was really a mess, toys everywhere leftover pieces of past projects and stacks upon stacks of stuff. It was time to really sort it all out, it has taken a few nights and a Saturday or two, but here is pretty much an in progress shot or two of the room before a major toy sort the next day. 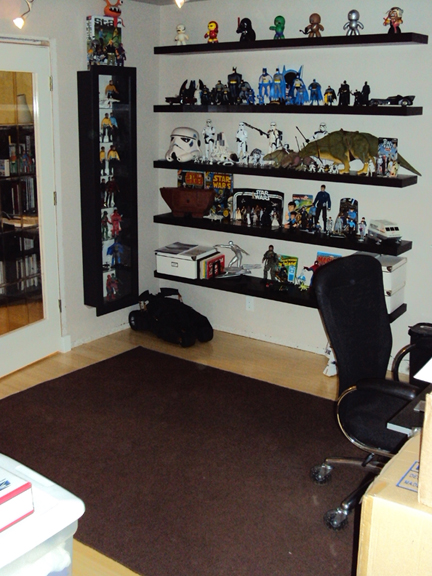 I have taken what used to be a shrine to Batman and set up several of my collecting interests. At the top is all my Mighty Muggs, I don't know if I would call myself a Mighty Mugg collector per se, but I do have a few and I sort of like the simplicity of these ugly little dudes. Also there are maybe a couple more I would like to get, but no hurry. Next shelf I have started displaying my loose Batman figures and the like. Just Batman only, I say started because this represents maybe a third of all my Batman items. I am slowly unpacking the rest and may shoot some pictures of the whole shelf crammed full of Batman, just so I can get a count. Next from the top is my trooper shelf, this is about half of my troopers, maybe a little over half. Right now it has basic troopers represented and some sandtroopers, I will ad some scouts and more sandtroopers, but I am trying to keep it in the OT range, sorry Clone Wars fans. I have pretty much ditched most of my Clones, I hung onto a handful but that's it. Next shelf down is the "New" Original twelve I have been working on with Brian at Yesterville Toy Room, some of my vintage Star Wars and about half my Spock collection, again some of my Spock figures are packed and are in the process of being unpacked. The bottom shelf has my box of Minimates, some select Joes and a Marvel or two. The cabinet houses my EMCE Trek collection and my original Megos.

Next up is my drawing desk. Right now just shoved in the corner with a long box and tote full of comics under it. I will be sorting these and thinning them out as well, more on that. Right above the desk is the BMF and my Gentle Giant Stormtrooper, plus a couple X-Wings.

Finally my storage closet, stuffed full. It's a sliding door set up, but trust me if I was to slide the door the other way you would get more of the same, tote upon tote upon tote of stuff! This is about half packaged and half loose toys. The totes on the floor in front of the closet are some books I am sorting through, misc. stuff and two more totes of loose toys. Oh also I have some packages I have been meaning to get in the mail to a couple of blog buddies (those will be leaving in a few weeks I have to stick some more things in them). So, here we have the reason for the post. This closet is so packed I cannot enjoy what I have. So I have been doing a MAJOR toy sort this week, ending in one helluv a garage sale this Saturday. My goal it to loose the stuff that is really not in my new range of collecting interests, ditch some stuff I really do not care for (some extras and someone of a kind, so to speak) and generally re claim some space. I have had probably five purges over many years, but this one is really cutting close to the bone, it's what I had deemed in the past all my keepers, I will say there is some Star Wars and Batman things that are hitting the chopping block, its rough, but needed. Time to really put in the effort to simplify the collection some. I really would like to have at least half the closet back for stuff that needs to go in there. 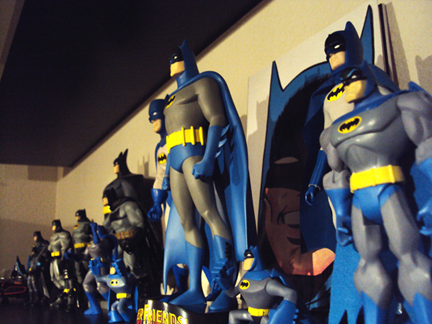 I am by far not finished collecting stuff, there are a few toys I am still on the hunt for, but in the past few months I have trimmed back my wants and needs and have tried to stay focused on the task at hand. I will be talking about toys again in the future, but first I need to get it more organized and gain some breathing room.
I will leave you with a little shot of the Batman shelf, this morning though more Batmen had joined the army so be on the look out for updates. I will also try and shoot some better pictures of each of the shelves if anyone is interested in seeing that sort of thing.

P.S. Don't worry Bubba Shelby, all my BTAS stuff is staying I still have some posts to catch up on : )
Posted by chunky B at 12:00 PM

Email ThisBlogThis!Share to TwitterShare to FacebookShare to Pinterest
Labels: collection

"Cutting close to the bone." That's a good way to describe the territory you've ventured into... Star Wars?! Batman?!

That is one sweet collection buddy. : )

i was at Toys 'R Us just today drooling over the Batman Beyond Batmobile :D
Didja ever see the Human Torch Mini Mugg?? Cool!

whew - I was worried there for a minute ;)

And my soon to be wife(we're getting married this Saturday, Oct.16), thinks I have a lot of toys. I would love to see the collection you have. After your sorting, let's see the final result.

@SDTB - I have seen it online, not in stores, Muggs around here were scarce you had to buy them when you had the money and saw them or they were gone.

@LPM - Thanks, I always feel like I clutter up my displays. The Batman shelf will be stuffed full as I am going to see how many Batman figures I have open and how many I can cram on a shelf.

@LEon - It doesn't hurt to make room for stuff, but it is a lot harder than I thought, sort of easier said than done.

@jboy - Thanks, it's funny your collection is growing and I am trying to shrink mine.

@BS - Don't worry I have the BTAS stuff under lock and key with Gotham's finest, hand picked by Gordon himself on the case.

@ Jason - I have probably been collecting stuff seriously for 24 years, and I have had around 4 toy oriented garage sales, and have had about 2 other purges where I gave stuff away to friends, friends kids and tried to sell on eBay. I probably could fill this room with totes if I never did any of that.

I will shoot picks of the final results, the display may not change much, but I plan on cutting the totes in the closet in half.

Oh and congratulations on your upcoming Wedding, that's great news!

Just so you know, Chunky, tomorrow I move into my new house with my wife, in which, for the first time since 2004, I'll have a room all to my very own and will be able to start putting together my ultimate collection display.

Seeing your office is an inspiration to me.

But be warned, I'm taking the flagrant display of your Batman collection as a direct challenge and we may just have to have a "Bat Off" to see who has the most pointy-eared toys. ;)

Second, oh it's on, it's on like Donkey Kong!

I look forward to watching this challenge.