This is it! The last dance! 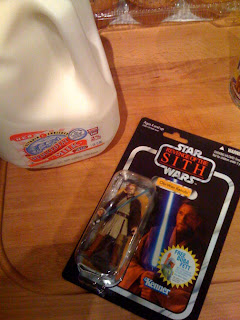 I had to get it out of my system, "once more onto the breach", this is nothing special, just a lone action figure from the new "vintage " line. A repackaging of Obi-Wan Kenobi from his appearance in Return of the Sith. He will not even stay on the card, matter of fact he is posing with his lightsaber right next to the keyboard as I type this.

I had seen him taking up some peg space at the toy aisle at the grocery store, a place I fondly call the magic grocery store, they always have cool toys at this one. Bubbashelby would get a kick out of it, the sign for the aisle reads "Small Doll Aisle". I always tell my wife when we are done shopping I am going to "peruse the small doll aisle", it's customary now to end each shopping trip with a walk down that aisle. Man it's going to be a hard 28 days. Anyway, I was their just this past weekend and knew I would be returning for some things I was bound to forget, milk being one of them... really I always forget the one thing I tell myself to get.

So, tonight being the eve of my little challenge I stopped to pick up the milk and a few other items, plus this last toy purchase for 28 days... hopefully. Like I said I have things I have already bought coming in the mail so it will not be a total drought. I just will not be buying toys this month, just to see if I can.

I have seen by some of the comments from my previous post that a lot of people may not share the same enthusiasm as I do about this little experiment, and a couple look like they want to join in. What's the worst that can happen, you go a couple of days and buy something, at least then you know your limits. Plus with eBay and every other outlet to buy toys are you really going to miss something and will it be the end of the world if you do?

I'm going for it, if for nothing else to say I tried to shake the monkey for 28 days, plus I told myself that if I make it the full 28 there will be a new AT-AT taking up some floor space in the studio.

Let's get this party started!
Posted by chunky B at 9:30 PM 7 comments 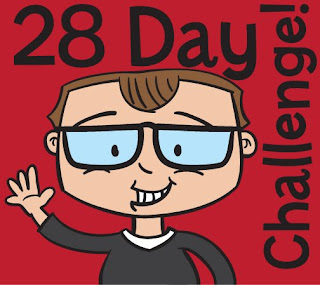 I thought of a little challenge for myself this morning, no toys for 28 days... okay what I mean is no purchasing toys for 28 days. My wife thought this was an awesome idea, then I told her I was going to throw it out on the blog to see if anyone else thought they could hold out 28 days, she told me I was going to have a very lonely time. Whatever! Lets face it I am not going to stick to the routine of reporting my budget every month, I believe I stopped last year around this time, but this is something I think I can do. Pffft, what's 28 days. Right?

So with that I will still talk about toys, shoot pictures of toys and I actually have a couple of Ebay purchase scheduled to arrive in a week or two so I should be golden. I paid for them this past Saturday so I'm not buying them in February. My only rule is if someone gives me a toy, that is cool, but I can't beg them for it or ask for it, it just has to be given freely. I'm really excited about this. So with that I may make one last trip to the store tonight to get it out of my system, I have cleared my Ebay watch list of stuff I have been hoping to pick up in the coming weeks and will do my best to stay away form the online stores and the toy aisles.

Starting tomorrow the count down begins to see how long I can last at not buying a toy. In 28 days I might reward myself with something cool and special, we'll see in 28 days.

One for the WTF? column 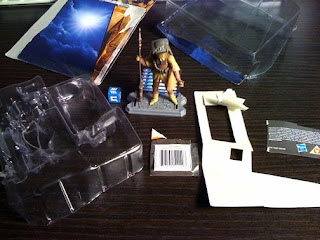 Soooo, I found myself at Target and they have some of the same old figures, but there was a Princess Leia in Boushh Disguise hanging on the pegs, I thought about it for a minute and left it, passing an end cap with another one. I went ahead and kept walking, After I collected the items I came for I decided, what the heck, pick up the Leia. Somewhere in my mind I figured the one on the end cap was the better and it was closer, so I walked back by and grabbed it, not giving it a second look. I checked out and made my way home, just tossing the bag on the kitchen counter when I came through the door. Hours later I decided to open her up and at first glance totally missed the re tapped blister. The thing that seemed off was that the little Battle Game Card was tapped to the insert with a piece of masking tape... huh, that's weird. Oh well.

I pulled the figure form the package and was sort of disappointed about the cut joints on the elbows, the figure was taped and banded like all the other figures I had picked up before, so no worries... but what was the deal with the Battle Game Card??? Oh well time to remove the proof of purchase, wait why is it taped in a hole the same size as the POP? Holy crap I had been had. I immediately logged onto Rebel Scum to do some research, crap they haven't updated their archives with this figure yet, a quick search of the assortment number and I was lead to the figure I had just bought. That threw my first hypothesis right out the window, that the UPC was clipped from another package and replaced so our smooth criminal could gain an extra buck... see I checked my receipt and I did pay a dollar more for this particular figure than what was marked on the shelves... at least I think. That's all a bust now though, why would someone go through the trouble to duplicate the barcode???

I checked over the contents of the package, the figure seems like the one that goes in there, it has the tiny thermal detonator, the helmet, weapon / staff, the stand, dice and the card... something is missing??? THE EXTRA WEAPONS ARE GONE, true I would probably have just tossed them into my extra accessories box, but hey I paid for those! 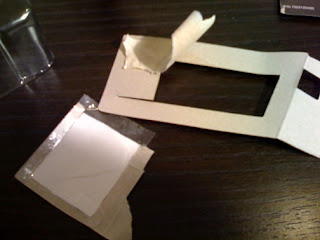 So this is what I came up with. The pleasant gentleman or lady (but lets face it I do not think a lady would do such a thing) bought this figure, carefully cut the blister on three sides, took out the inner figure tray out and removed the little baggie of weapons and then tapped the card back, since it would be held up by the extra weapons baggie. Then slide the figure tray back, but not before cutting a piece of gloss card stock, poster board or photo paper that had a scanned and printed duplicate of the barcode and placing it back into the hole they cut the original barcode out of. I will add the Xacto skills here are really impressive. Why? I mean really? Because they wanted the extra weapons for the little army of clones they are massing in their sand box? The original barcode will come in handy to mail away for that Rocket Firing Boba Fett so they can sell it on eBay latter because they have already mailed away for twenty of them and plan on getting rich off selling them in the next year or so.

I think I am more amazed at the time and effort in this crime, and lets not mince words it's a crime, fraud. After dissecting this package and examining the work done I have little more to do but toss this persons hard work into the recycle bin and enjoy my hopefully new Princess Leia in Boushh Disguise, and of course blog about it. I do feel a little ripped off and really dismayed from all this. In general most collectors I meet are above this sort of thing, but this does not give me hope for the future of collecting toys or even Star Wars toys for that matter (at least in this area), this person was out to rip off an unsuspecting child or grandparent and they got me. I will admit I was in a hurry and did not pay as close attention as I should have, but really should I have to do that, over a eight dollar toy? Really have we come to that? Looks like Mos Eisly is not the only retched hive of scum and villainy.
Posted by chunky B at 6:10 PM 7 comments 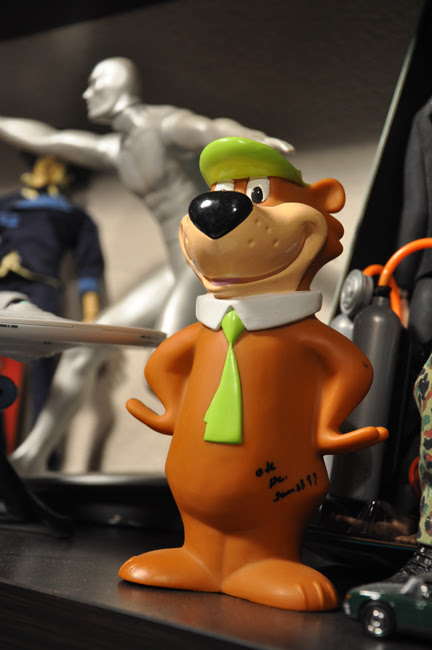 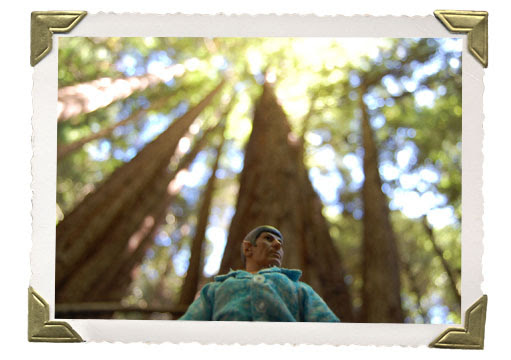 Eric a.k.a Bubbashelby has entered one of his photos from Spocks stay in a local photo contest online and voting starts this Sunday January 23, 2011! So go and vote for Spock and Eric at the link here! Go now and live long and prosper.
Posted by chunky B at 7:19 AM 6 comments

Sorry everyone, I have been extremely swamped at work and working at home as well, hopefully one more week of communication blackout and I will be back to posting.

I'm leaving this guy to patrol the borders of Eclectorama till then. 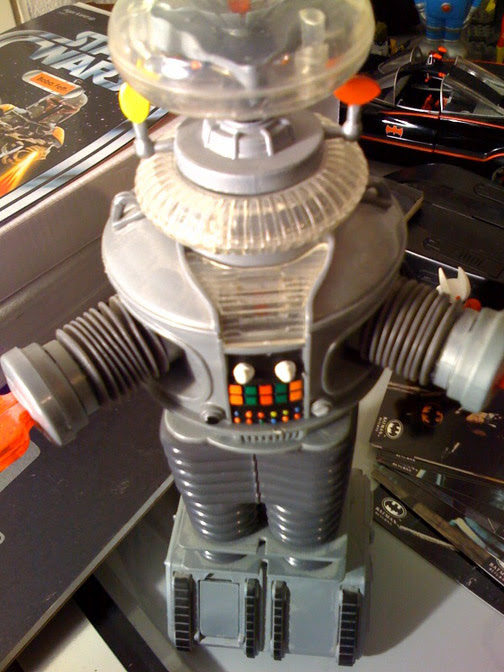 Email ThisBlogThis!Share to TwitterShare to FacebookShare to Pinterest
Labels: Lost In Space, Robots 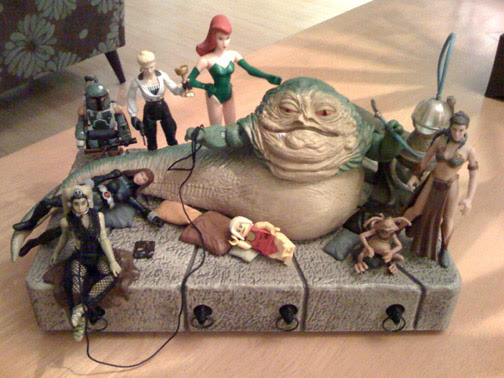 This is how my Jabba rolls.
Posted by chunky B at 6:00 AM 8 comments