Earlier in the week Reis at Hey! Look at my toys! sent out a call for some trades. So, while I was getting an envelope ready for the two I had on hand, a few of my other minifigs decided to show them the door. I don't blame these two for jumping ship now. 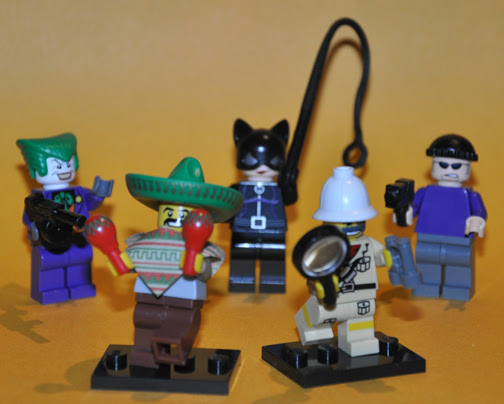 Wow that whip has to sting! That's the last time I give my security team a week off. Okay, so, while those two were leaving the EHQ (Eclectorama Headquarters) here is some incoming post.

First is a printed invite I had drawn up for my Niece's baby shower. I included my Niece, her cat and her husband. I tried to personalize it a bit, she likes to shop and he works in the sound and lighting industry. Hope they like it. I had these printed at Faulkenberg Printing Company and I couldn't be happier. 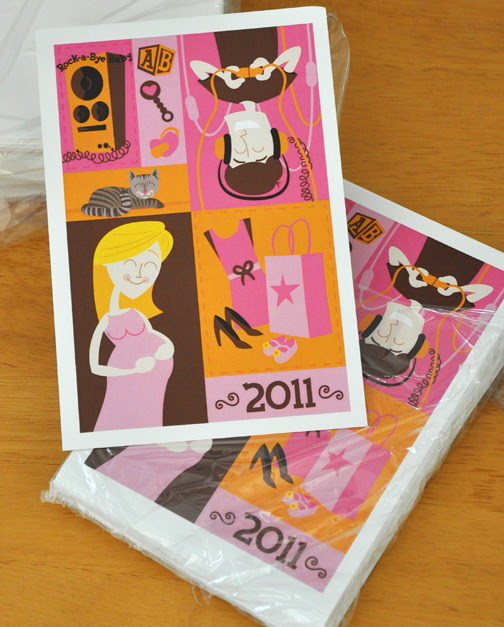 Then there are these sets of awesomeness! In the package from Faulkenberg was a few packs of the first ever Eclectorama Trading Cards! I must have a fan at Faulkenberg, it's really kinda of cool seeing artwork you worked on in a format you never thought you would see artwork you worked on. Don't get me wrong I have had stuff printed both in my day job and as a freelancer, some for Star Wars Kids Magazine back in the day. But this is artwork I just did for fun. 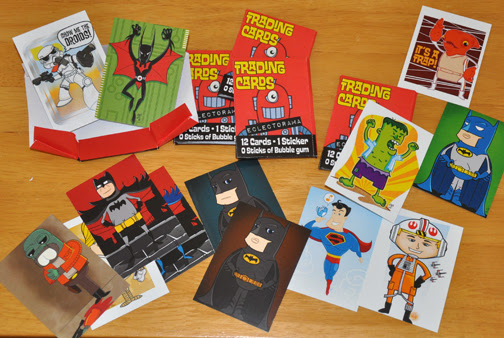 I was sent five packs, I of course I am keeping the one I opened, but was told that all the packs had the same cards... oh and one sticker. So that means I have a few to giveaway! Should I have a contest, a drawing, or just send them at random. Hmmm decisions, decisions. Let me think on it and I will make an announcement next week. I think I will even do a few artist's sketch cards to sweeten the deal. What does everyone think? 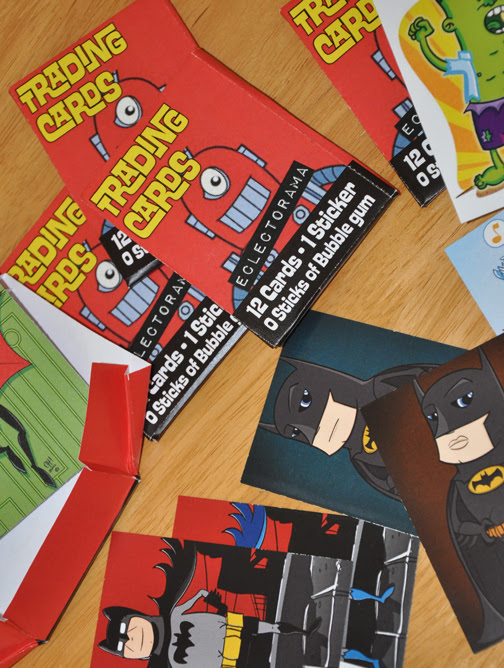 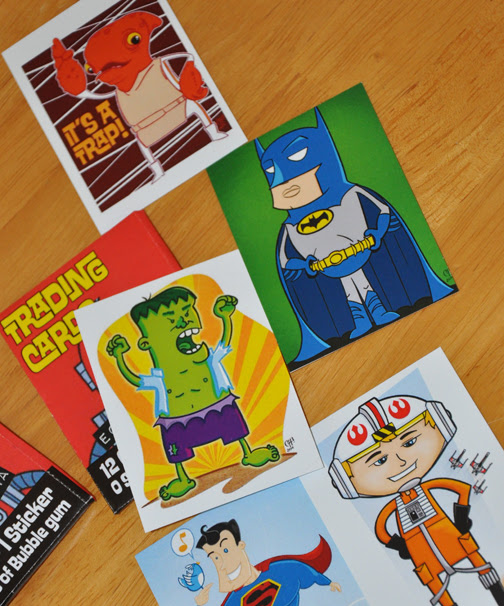 Have a cool weekend and thanks again to everyone at Faulkenberg Printing Company, especially the Eclectorama Fan ; )
Posted by chunky B at 12:38 PM 9 comments 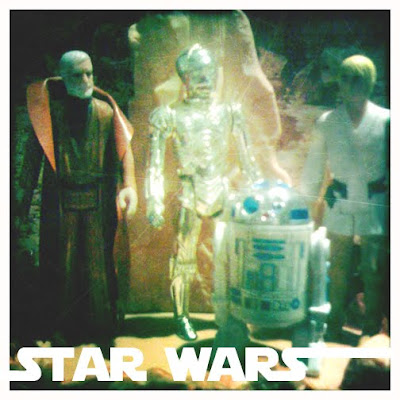 As if it wasn't obvious without the text. Was bored, these were on my desk, had camera phone.
Posted by chunky B at 9:15 AM 2 comments

That last comment in my last post got me thinking. When I got this Robin home today I looked at it and the first thing I said was "Robin does not have a cape!"

For a split second I thought it must either be a mistake on the toy or a safety thing since he is packed with a motorcycle. I mean I wouldn't get on a bike with a cape. But hey Batman does it, Then I thought it couldn't be a cycle thing he has no Helmet. Surely the Boy Wonder would wear a helmet. Looking on the back of the packages I noticed the picture had a Robin with no cape. Are they all like this? I could have sworn I gave one of my Nephews a Batcave and it had a Robin with a cape, I could be wrong.

I knew exactly what to do though. I found some scrap black fabric and some yellow felt. In hindsight yellow fabric would be much better, but felt is what i had. I grabbed some of that fusing material from my wife's sewing kit and heated up the iron. I fused a small swatch of the two materials together, let it cool and trimmed it into what I believed was a decent Robin cape (slow evening here in Texas folks).

I gently pulled and twisted Robin's head until it popped off. It's on there pretty tight. It might help to run it under a hot tap first. The base of the neck has what looks like a plastic collar where a cape should be so it works perfect to help hide where the cape slips over the peg. Cut a hole and slide it over the peg then pop the head back on and done! 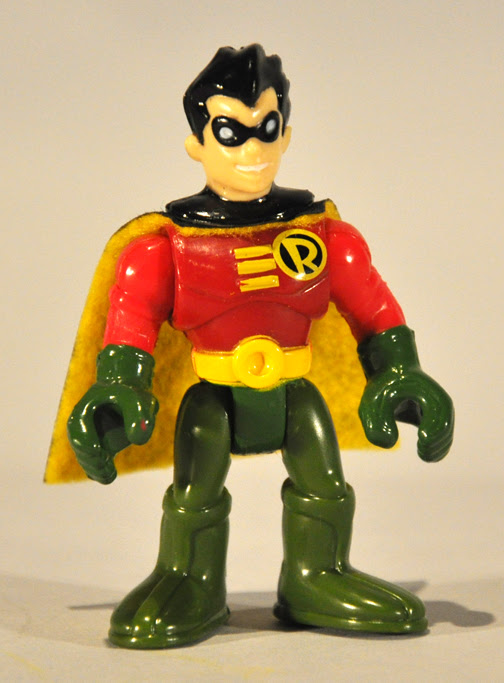 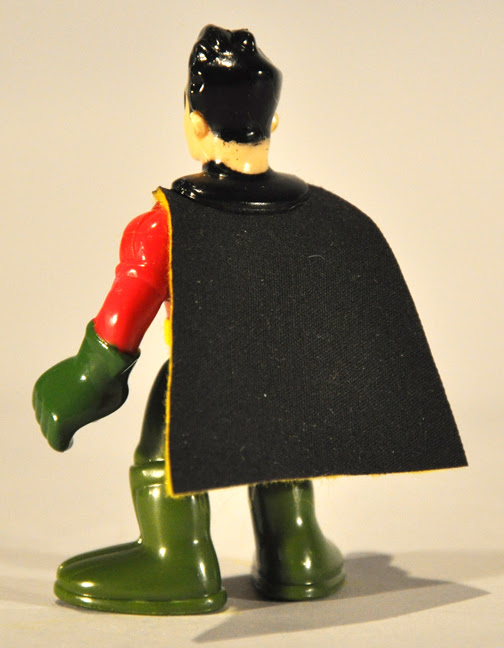 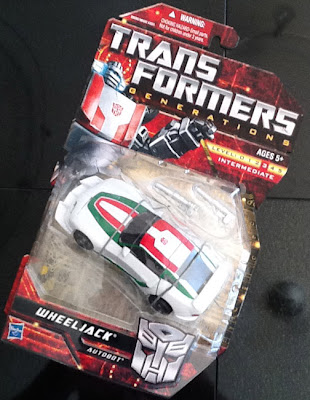 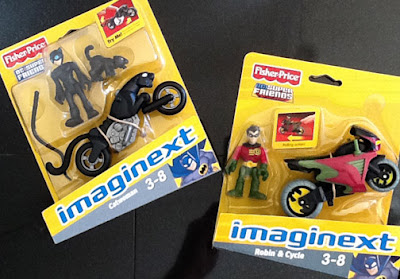 Also as a stroke of luck I spied these and snagged them both. Toy budget 0, Charles 3.
Posted by chunky B at 11:23 AM 6 comments 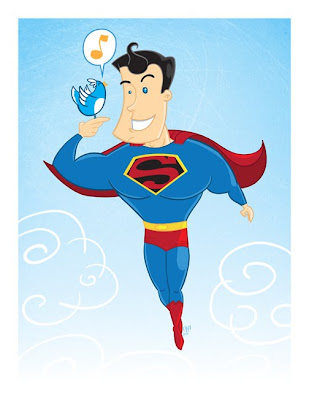 I can't say I am the world's largest Superman fan, but I do loves me some Max Fleischer's Superman.
Posted by chunky B at 10:23 AM 5 comments

More for the Garage Sale!

Just a quick post, if you know of anyone looking for cool stuff I dropped some new things up for auction. 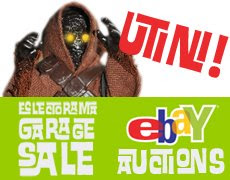 Spread the word! Thanks, I now return you to your regular scheduled blog... okay, so it's not so regular, promise I will post something more this week.
Posted by chunky B at 10:08 AM 3 comments

Have you ever danced with the devil by the pale moonlight?
I ask this of all victims, I just like the sound of it.

Anyhoo, I felt like I owed myself a drawing, and I do like Batman so I drew me a Batman... 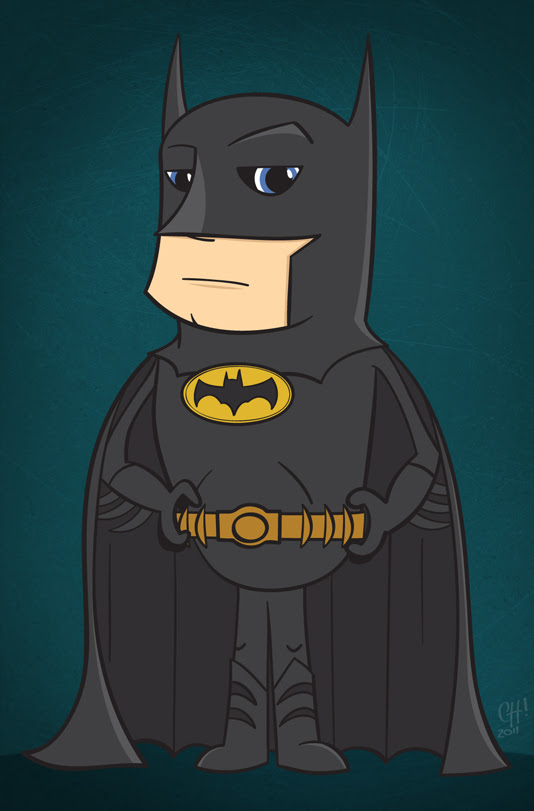 Then a friend told me I forgot the Keaton Lips, ha ha, so I fixed the drawing... 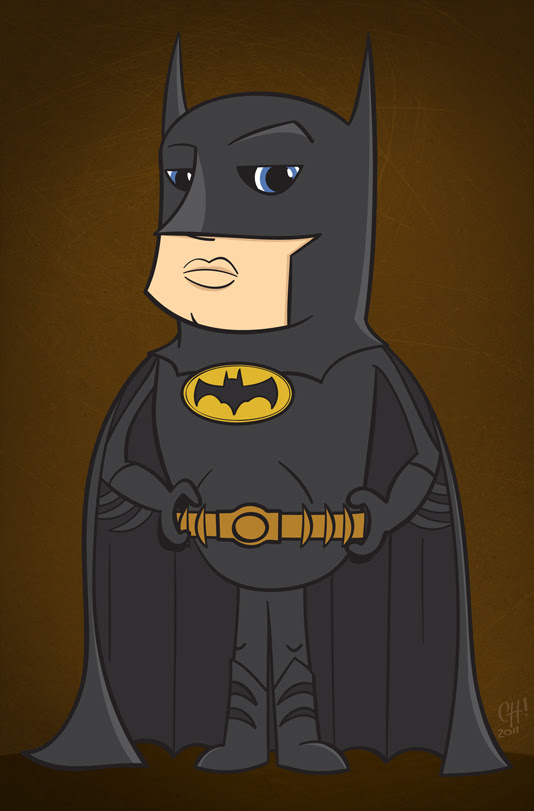 I dug it so much I made myself some wallpaper... 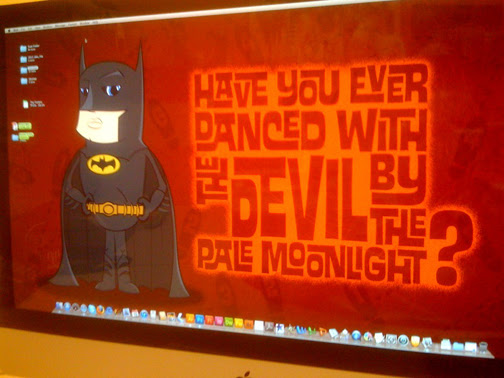 Then I thought I would share and so I made you people some wallpaper... 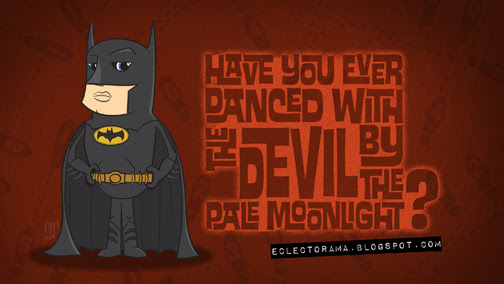 click it to get it biggie, batty size and get jiggy with it!
(sorry I scaled it for my monitor, hey what do you want for free!)

Oh, I have been thinking of doing commissions... anyone interested?


EDIT:
A little re-color ala Kenner... 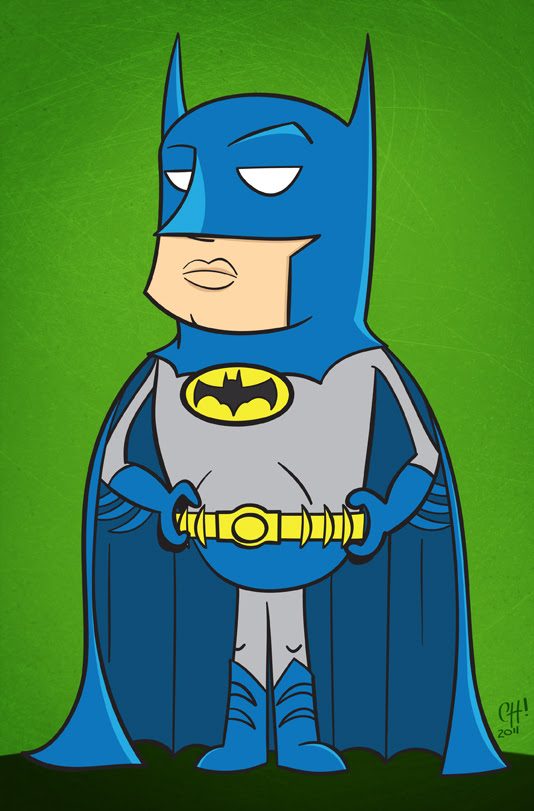 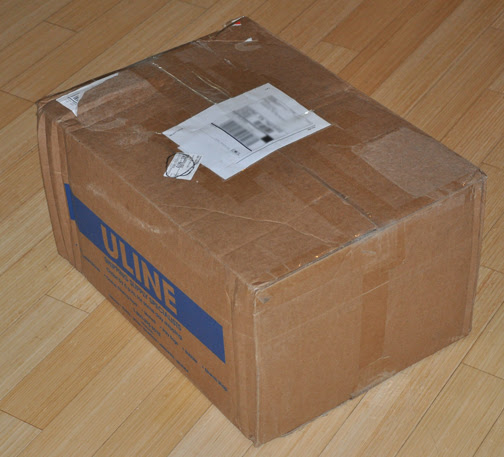 Sorry it's been a while since I have posted. This time of year always seems like my most hectic at work and that carries over to home life as well as we are always trying to finish up house projects. I am almost done with some major ones (well what I consider major, I'm sure they are minor). Anyhoos, this is something I have been meaning to post for some time, actually it's been several weeks.

This is what I like to call Pay Day. See I have this arrangement with Tate's I do a bunch of stickers and stuff and instead of paying me freelance they send me the occasional care package. This is actually the second one this year, the first contained Galactus and a ton of other goodies that have popped up on the blog. Tate's are always good to me and they really keep up with what I am into, they make sure I have a Batman, Stormtrooper (or other Star Wars thing), some Marvel and as in this case some Hellboy. This is also when they send me a ton of the stickers I helped in creating. I can't say it enough I love Tate's and all the people there and I always look forward to doing more drawing for them. To be honest I did purchase one item in this box, but the rest was earned with blood, sweat, and digital ink. Hope you enjoy. 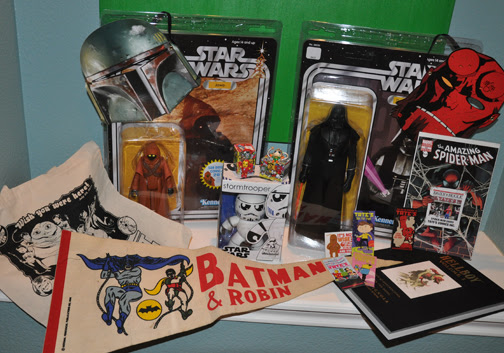 An over view of all the cool swag! 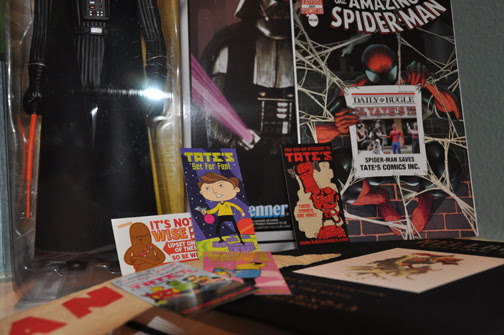 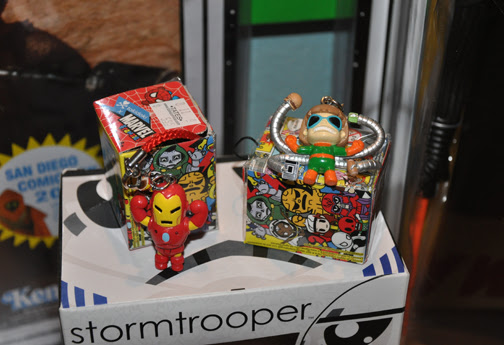 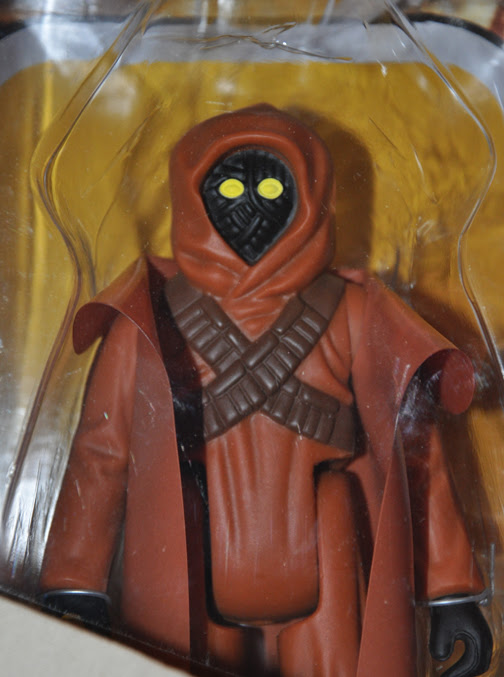 This is the one I bought, sweet vinyl cape Jawa! 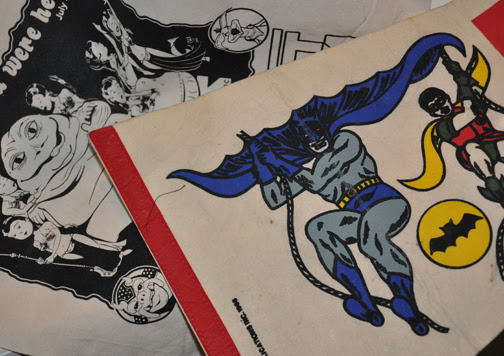 The Jabba Dark Horse Comic Bag (I helped with the illustration ; ) and a sweet Batman and Robin Pennant from the Sixties. 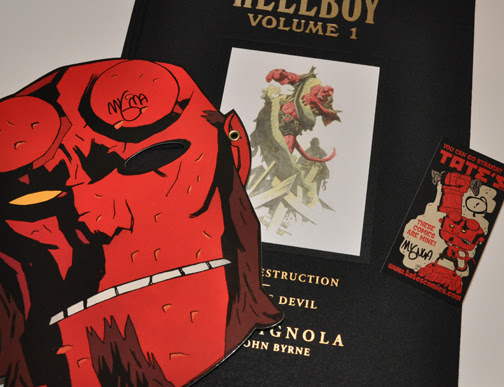 This was a total surprise for my son and I to share... I knew Mike Mignola signed a sticker for me, but... ...this was above and beyond my expectations!

That's it! I received this package about three weeks back and still amazed at how well they know me and all the cool stuff in there. Big thanks again to Tate and his Family,the staff and all! I received another package from a fellow blogger this past weekend, that one you have to tune in later in the week to see.

Hopefully I will get back on some sort of schedule and as soon as my wife clears out her shoes from the closet, ha ha, I will be putting some more stuff up for sale on eBay (have to make room for that Jawa).
Posted by chunky B at 12:46 PM 7 comments