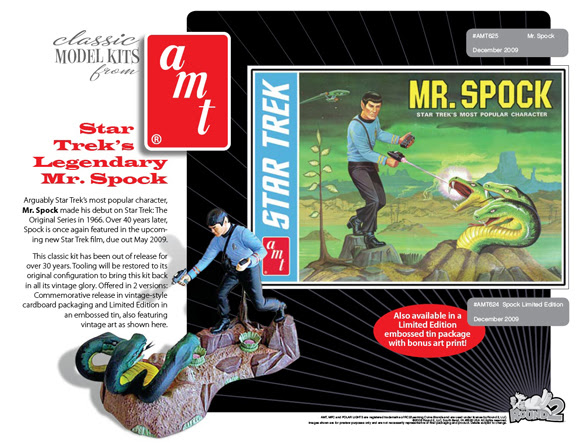 You may remember the first post after last years Eclectorama Holiday Hiatus, I was gushing about Playmates Toys returning to the Trek market. I have seen the new Trek merchandise from Playmates Toys and I can honestly say good or bad, I am happy to see some new Trek on the pegs. Also recently my "brother-in-toys" Eric at Toyriffic clued me in to some Art Asylum Trek figures at TRU (that's Toys R Us in the biz), more on this later on. More importantly than all that, I ended that post with a wish of getting a re-release of one of my favorite AMT models from the Star Trek line.

I can't freaking believe this model is going to be re-released. The Trek Fairy has been listening and if I'm lucky come this December she'll tip off Santa and I'll have one of these under the tree. More than likely I will check the web daily till it's released and then pre order it, then I'll check daily until it ships...

Anyway it is truly a happy day to be a classic Trek fan, I'll have some more posts soon, I now return you to your regular scheduled programing, and most importantly... Live Long and Prosper!

Hey everyone out there in Eclectorama Land! Happy New Year! Let me hear you holla!

I've been busy trying to come up with some new features and bring back some old ones, in the mean time I was asked by the Toy Review Guru himself, Michael Crawford from mwctoys.com to be an industry judge! I can't say enough about what an honor it is to be asked to participate and have my good friend Matt from Legions of Gotham recommend me. Thank you Michael and big thanks to Matt.

Anyway here's the official release, so go gets to some voting people and I'll see you soon, back here for some new posts!

This year, there are 147 judges from within the industry, from every aspect of the business and from across the globe. They have begun their voting as of January 5th, and will complete the process on January 14th. The votes will then be compiled, and the final results announced on January 20th.

But there’s also a chance for readers to give their input! Once again this year, Michael will be running his People’s Picks awards, only this time the readers will be voting using the same categories and nominees as the Poppies Judges. You can vote now for your favorites by going to:

Or by going to mwctoys.com and following the link from the main page. People’s Pick voting will be available during the same period (January 5th until January 14th), and the announcement of winners will also occur on January 20th. Vote for your favorite pop culture collectibles now!
Posted by chunky B at 1:31 PM 0 comments