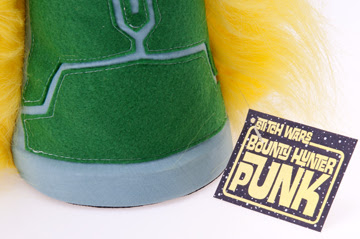 Whew! I didn't think I would get my entry done in time to make the deadline for the upcoming Stitch Wars Strikes Back show at the Bear and Bird Boutique Gallery. I had actually planned on making a set of three of these for the show, to include Darth Vader, a Stormtrooper and of course this Bounty Hunter but you know how that goes, the best laid plans of wamp rats and men. Being slammed at work with preparing for an even earlier catalog season and taking on several projects for my family including some stuff for my Nephew's wedding in about a week hasn't helped and has me pretty pressed for time (that would include time for blogging, so sorry).

Still I plan on making more punks, even for my own enjoyment, or possibly to set up on Etsy. I just love the lo tech, low brow look of Punks, or Cat Punks as they are also called. I plan on completing my Imperial Collection and move on to some Rebels, then who knows after that. 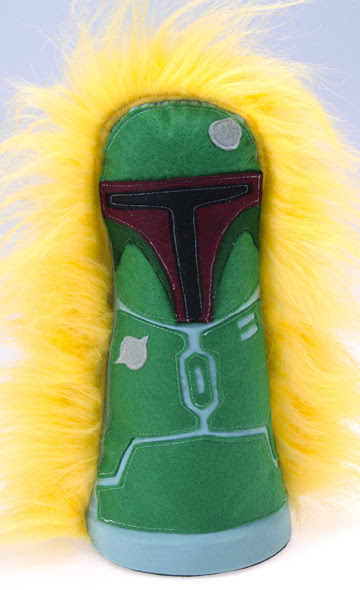 Since the Stitch Wars show revolves around sewing I went ahead and made this Punk with stitched on elements and a more presentable rounded wood base, covered of course. Punks in the wild are usually painted or screen printed with cat or clown designs and include the fur trim and are weighted down way more than this piece. Plus they have a square wooden base, makes them a little harder to tip I guess. I think I will try and keep the round base, but if I do move toward the more traditional base I will finish it instead of leaving it unfinished as they are usually found. I will also keep the weight down as these are more about displaying as art than playing with. 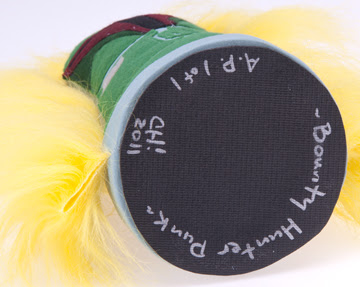 The fun part about the expanded collection it will give me a chance to illustrate and paint on the canvas for each design, or possibly do some screen printing, sort of giving them my personal touch. I promise to post things here as I get them done, so stay tuned. 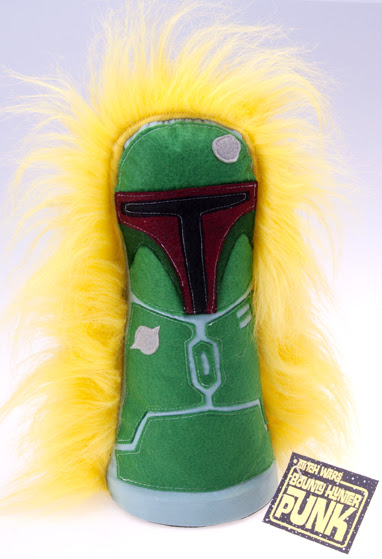 I will also try and post more illustrations and sketches, some artwork for Tate's Comic Shop, plus whatever fun stuff I have been working on. I have been doing more roughs using an ipad, still not the best, but I think pretty good for finger painting. Well, enjoy the Punk. Be good to each other. May the Force be with you. 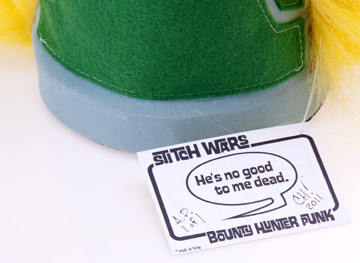 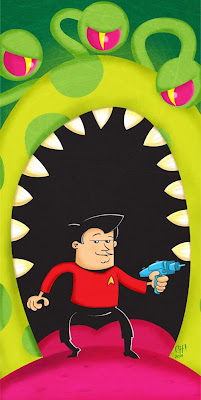 "The Captain is nuts, this planet is beautiful, how could it be dangerous?"
(click image to monster size it)
Posted by chunky B at 12:40 PM 3 comments 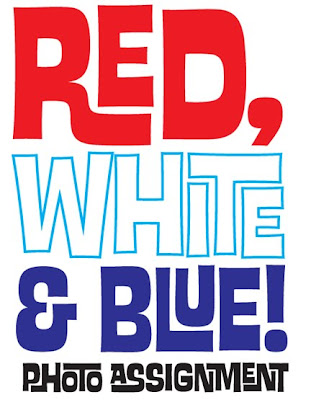 It's time again for a Photo Assignment reveal! This time I asked for some Red, White and Blue. It could be a Captain America Figure ( I got a few, not as many as I thought), a red figure, a white figure and a blue figure. A toy that had all three colors on it. It just had to be a toy(s) and had to have the theme on it somewhere.

So with that let's go, three cheers for the Red, White and Blue! 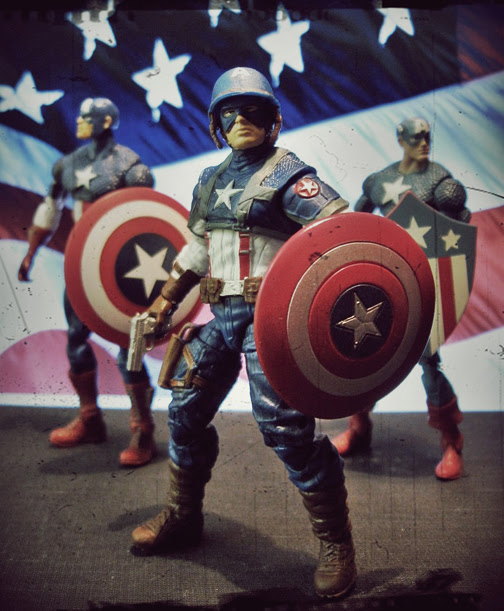 Reis had this to add to his photo, "You know you're going to get a gazillion shots of Captain America toys, right? ;)" 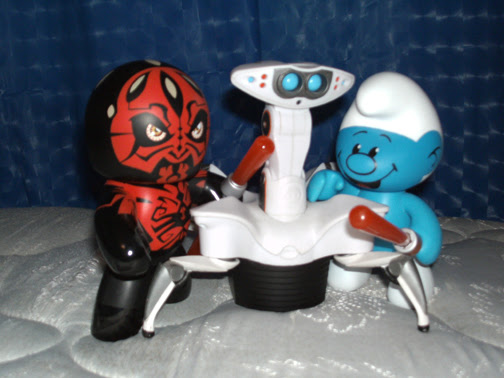 Matt "Still no website" sent in this with this explanation, "This time I have Darth Maul in a lightsaber battle with a Smurf and a white robot trying to break up the fight. I think DM will defeat both of them. Happy 4th of July!" 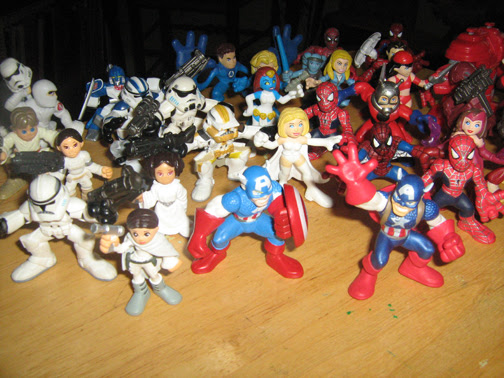 Logan sent this via Mock's email, "My dad told me what the next thing with the toys was. I looked through my toys and found some toys that were red, white, and blue. I also did a rainbow but I put that on my blog." 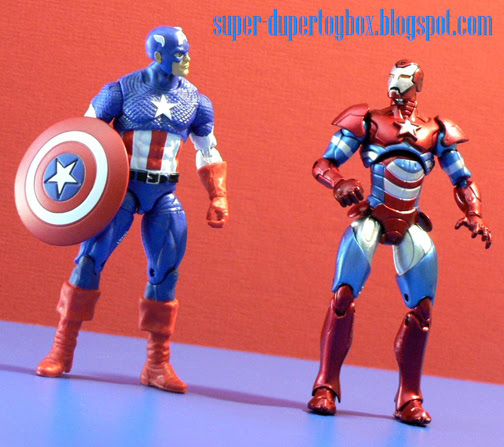 Colin (Super-D!) dropped in with this awesome pair of heroes, "I realize Captain America would be the obvious choice, but these 3 3/4" figures are new for me and I'm particularly excited about them :) Hasbro Marvel Universe Iron Patriot & Hasbro Paratrooper Dive Captain America! Happy 4th of July, Chunky!" 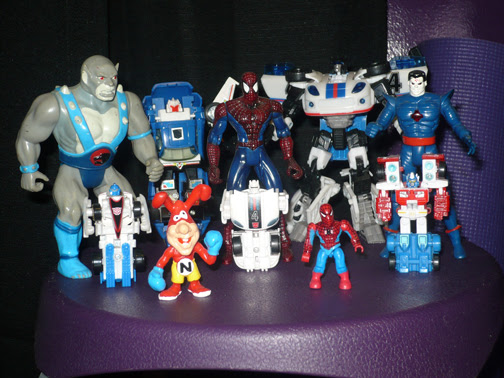 Jason rocked it with mix of characters, " only picked toys that had all 3 colors present. Jazz and Spider-Man(along with Panthro, Tracks and Mr. Sinister) are chaperones for their kids' class party. :)" 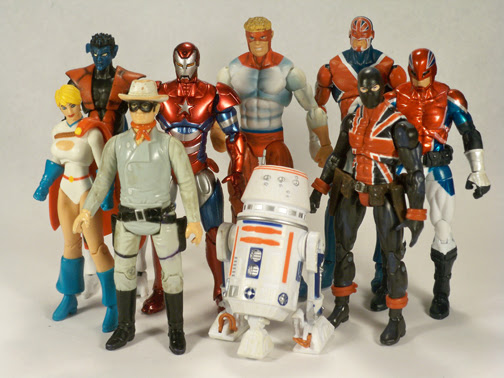 Victor sent this in "Since I have a bunch of Captain Americas, I thought I'd send in a collection of figures that AREN'T Cap.
Wasn't that hard, just had to go though some boxes to find something.
I think the most interesting find was the Lone Ranger who is RWB, he's just old and worn. I've had him since I was a kid.
Also interesting is that all the British Marvel figures are RWB, but that makes sense since the US was UK colonies.
Power Girl was a surprise since I didn't expect to find a fig from DCIH, but there she was.
Oddest RWB find was R5-D4 since I opened my "new toy" drawer and there he was. lol
Hope you enjoy the pic!" 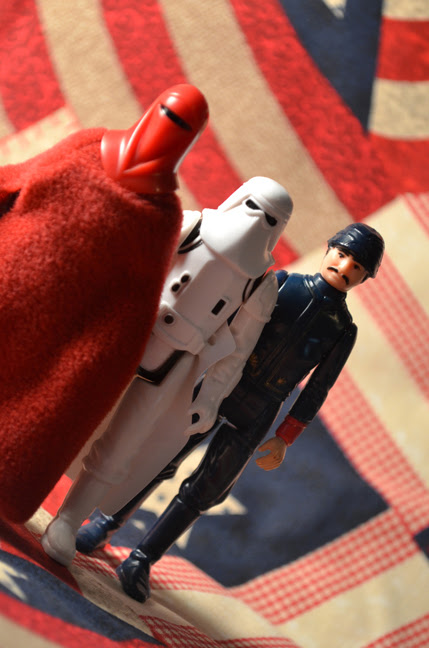 Brian stole my thunder and left me scrambling for a new subject, ha ha, "Nothing like getting something in just under the wire.... :)"
Funny his pictures never look like they are under the wire. 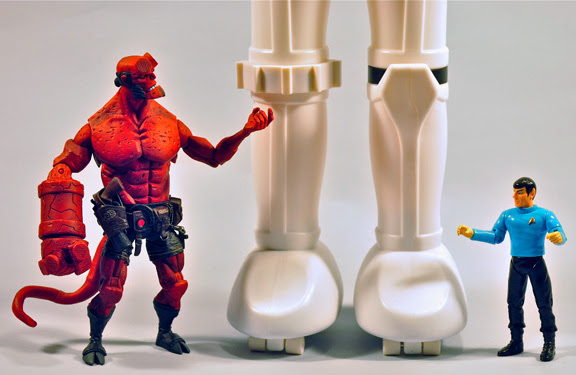 Last and least, ha, my "Plan B", when world's collide. Red (Helboy from Mezco), White (The legs of my Super 7 Stormtrooper and Blue (non other than Spock), Happy 4th of July everyone!
Posted by chunky B at 6:00 AM 8 comments