Gertie vs. Stormtrooper Out Takes 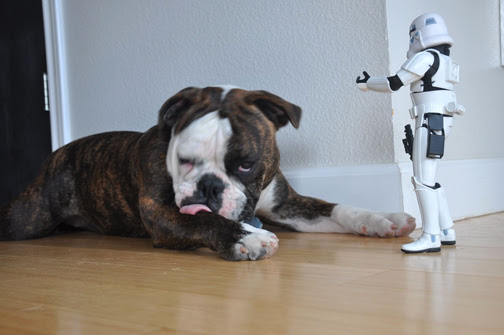 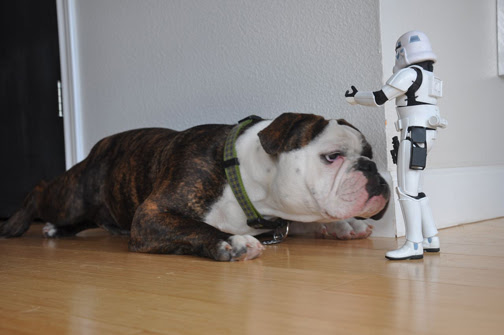 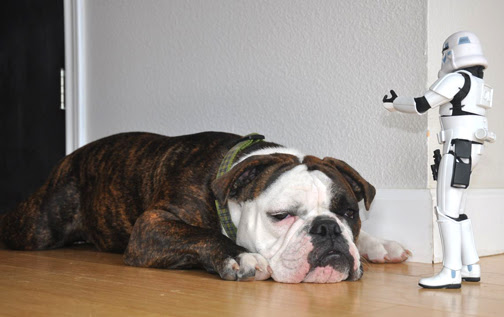 Wow! I never really thought Spockcation would go past Christmas, but it looks like it will be going well into 2010. That's even with not accepting anymore hosts. We have closed down taking new hosts and are going to keep it at what we have for now. Let Spock finish this initial trip, I do have one last stop planned at the end, but you'll have to stick around and see where that is. But, we are getting way ahead of ourselves, Spock still has quite a list of people he is visiting and plenty more stops to take use through 2010.

So, when we last left Spock he was traveling during the holidays, I think he may have missed celebrating Christmas. That's okay because the stop after this one may have an After Christmas Celebration planned, we'll see.

This stop though was with Nate, another member of the Mego Museum. I like that we have hosts from other blogs, the Mego Forums and then just fans of Spock or Trek or even toys. Makes for a nice demographic.

Well, without holding up the Spock Train, lets get to Spockcation! Now heading into 2010, where no Spock has gone before! 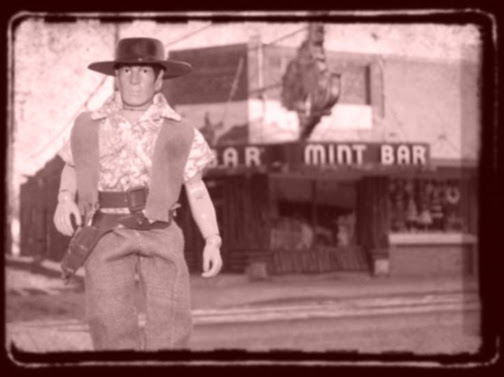 Looks like Spock stepped through The Guardian of Forever 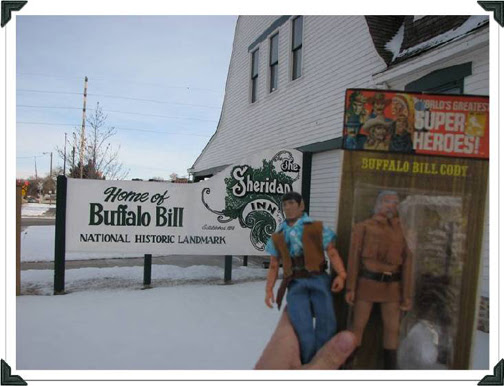 Good thing Nate new where to pick up some clothes so Spock would fit in! 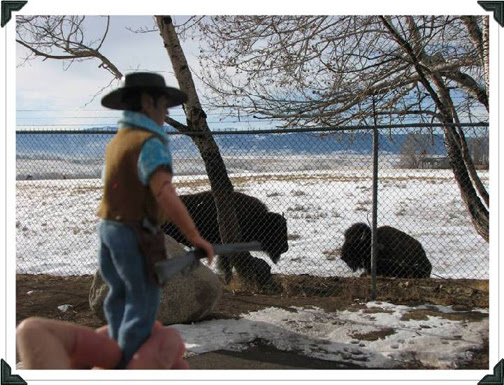 I think someone should warn Spock that he cannot hunt Buffalo. 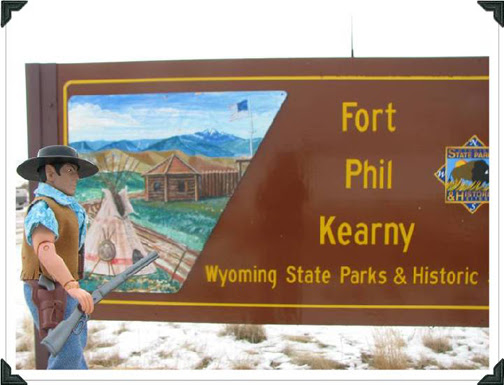 Spock takes in the sites at the State Park. 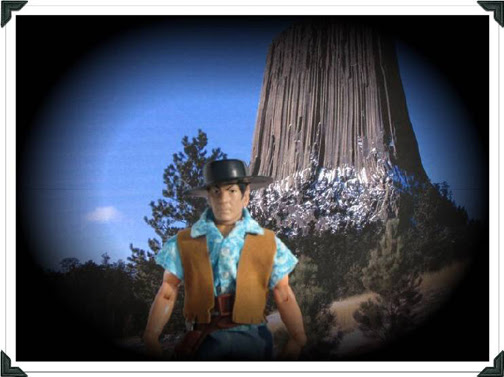 Looking for a Close Encounter at Devil's Tower. 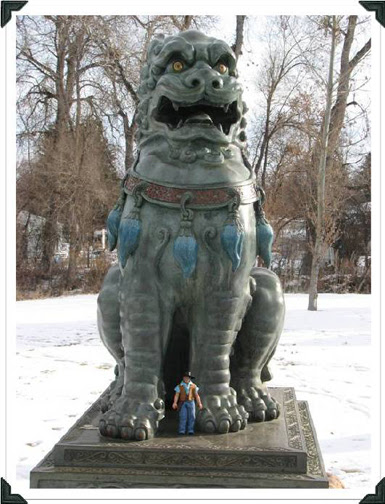 This statue reminds Spock of his pet when he was a boy on Vulcan. 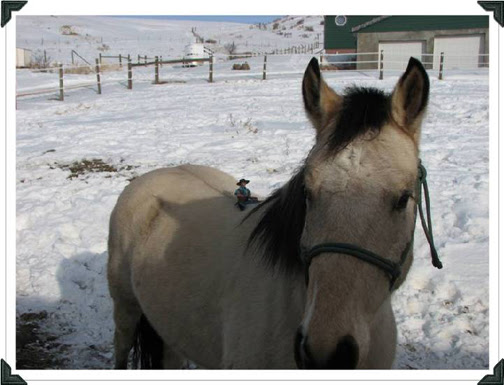 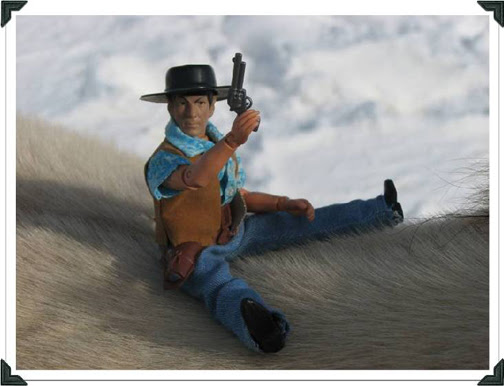 Thanks again Nate for playing host for Spock in Wyoming! He looks like he had a great time and also like he blended in well with the locals. Sorry if he drank all your liquor, I thought I had told him before leaving on his trip to take it in moderation.

We'll see ya'll next time for more Spockcation. As Spock put it Live Long and Prosper, ya hear.
Posted by chunky B at 6:00 AM 3 comments 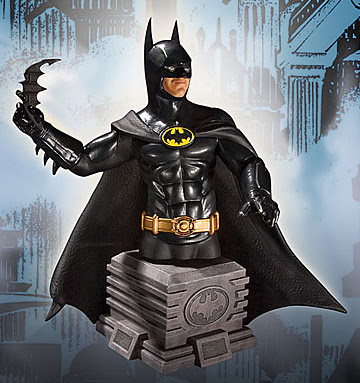 I have maybe one statue in my entire collection, but I would welcome another! Just announced from DC Direct, Michael Keaton as Batman Bust!

I am freaking out! 1) Because he's one of my favorite actors to wear the suit and cowl, and 2) Could we possibly be getting a Michael Keaton as Batman Action Figure from DC Direct? Hint, hint, Please, please, please!

Anyway, a special note to my family. It is perfectly acceptable to buy the Michael Keaton as Batman bust and a Giant AT-AT for Christmas presents this year. Call me and I will send you all the details. Never too early to start thinking about Christmas.

This awesome piece of Bat-Art is being advanced solicited and goes on sale September 15, 2010!
Posted by chunky B at 9:38 AM 8 comments

And this is the reason I need to stay away from Target... Also the reason I should change my morning ritual of reading all the "Toy News" out there in internet land. To be perfectly honest both were bought on two separate trips to the same store and with a small amount of Christmas money. I'm going to take the criticism and the hit though as it was money I could have used for something else.

I have decided that money received for a present should be counted in the budget, that's just me though. You might think of it as money you didn't have and it's just as good as a present. I just decided it's still money I spend or save, so it's in the budget. I also decided that a toy given as a gift will not count as a hit and that it is a bonus, mainly because I didn't make a transaction to get said toy. So, this means I will be sending links to stuff I want to my family for birthdays and holidays. This should help with my goal, since it will be mostly stuff from the list and extras I have found along the way.

Okay, enough about the list. The TIE Fighter says it's an expanded universe vehicle, but it has the coolest deco and figure, I had to have this bad boy. The pilot is from the evolutions set with all the extra articulation, a sweet pistol and holster and none of the ace striping on the helmet. The TIE itself is a white deco with a nice red "glass" color for the cockpit, which looks like it stepped out of the movie. The deal was I read people were scoring this set for 19.99 in some Targets, ours was still at 27.99, but that was enough of a savings for me from the 39.99 original price. I could have waited to see if it came down more, but our Target did something sneaky this year, it moved items to the clearance aisle and kept some in their regular spots, unmarked. So you have to take them to a scanner to see if the price has dropped. Of course you would have to know the original price in advance. Before Christmas they had tons of these TIE Fighters, I scoffed at the price then. Now, there were only three on the shelf and I thought it might not be there for another price drop, I missed a GI Joe vehicle two years ago playing the wait and see game.

The DC Infinite Hero is none other than the Barry Allen Flash. My favorite right after Batman, I paid full price for this guy, which hurt a little as these seem to be going for 6.99 now. Wow, these were 4.99 just a month ago, were they not? Not on the list, mainly because I forgot about him coming out, and also because I never see heroes I like in this line, it's always some character they have twenty of that I'm meh about. Now I already have a Flash figure from this line, but this is Barry Allen! Which I'm hoping is also released in the Mattel Retro Heroes line this spring. Now, that's on the list.

I'll open these bad boys up soon and do a whole big ole' post on each, just wanted to post an update to let everyone know I'm still around and also welcome my new readers. Be patient with me, I have two more rough weeks of designing catalogs and things should be getting back to normal.
Posted by chunky B at 9:57 AM 3 comments 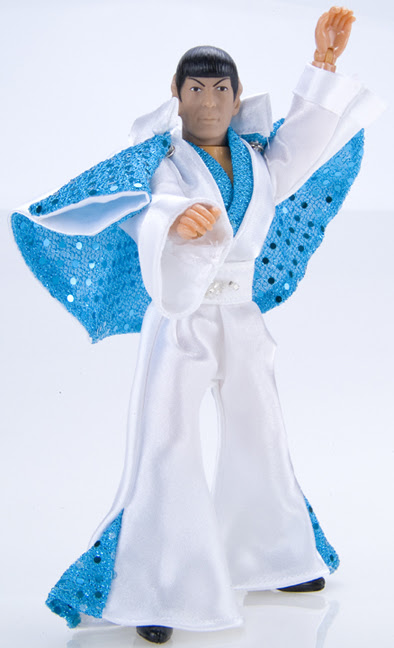 Happy Birthday From Spock and all your pals at Eclectorama!
Posted by chunky B at 6:00 AM 2 comments 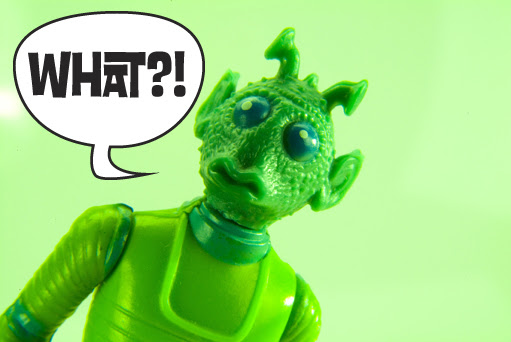 I've been thinking a long time about my toy collecting habits and decided today to cut back on my toy purchases for the next year. Now I know what everyone is thinking, but I am going to try very hard to do this, and not to worry I will still have plenty of toy goodness to talk about. I still have a few items I haven't opened up or shot pictures of, plus there is the whole collection just waiting to be featured.

Now of course I say this after making a trip to the store at lunch and picking up a couple of the Batman Brave and the Bold mini packs. In all fairness the two packs I picked up were on my short list of things I want.

So here's what I decided to collect over the year, it will be interesting to see if I stick to this list.

That's pretty much it. I think I will flush out a list when February rolls around and Toy Fair has come and gone. I may have to shorten the list, but as it stands I think I have a nice sampling of my favorite licenses up there. I killed off collecting the JLU figures except for Firestorm and I killed the DCUC line except for the lone Batman I want. GI Joe took a hit as well, only one figure in the plan. Star Wars I haven't really had a problem with lately, that wave 12 that consists of Empire Strikes Back guys is pretty sweet though.

I also plan on keeping track of the items I buy along with cost and location, I have seen this done on OAFE and thought it was a good idea, for my own information at least. I want to try and keep it under 1000.00 for the year, that's about 83 bucks a month. That has to include tax and shipping, so it should be fun. I really want to try and beat that figure though. That seems like such a crazy high number for toys, but the shipping alone can kill your budget.

Also how do you include Birthdays and Holiday gifts? I have some Christmas cash burning a hole in my pocket right now! Should that count? How about toy trades?

So I decided I need to stay off Ebay and out of the toy aisles, wish me luck! I think at the end of each month I will post a progress report, if anyone is interested. Also someone throw some water on Bubbashelby I think he passed out somewhere in the beginning of the post.
Posted by chunky B at 2:16 PM 8 comments