It's Official! Launch Date is Set! 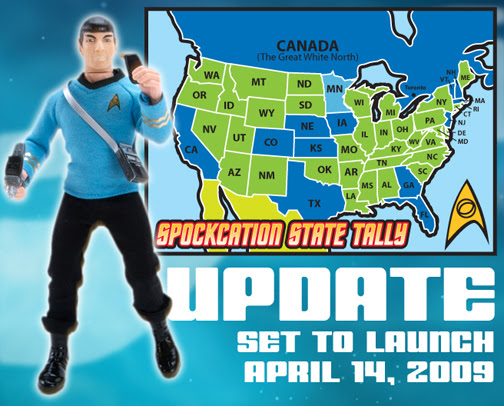 I like the way that sounds, like I'm announcing some big Star Trek Event... Spockcation, April 14th, 2009, Be There!

In a way it is a big deal, Spockcation has grown from an estimated 4 states to 13 states (including Canada), with a "maybe" for one more location to start things off. So I'm both happy and excited about Spock's trip.

So here's some fun facts about Spockcation so far:

• 13 States have signed up so far
• 3 States are being represented with multiple locations
• 2 hosts have volunteered to take Spock into neighboring States
• 17 Locations total so far
• 13 Participants (not including family members that are being recruited as I write this)
• Traveling Spock is a 2008 EMCE Toys Action Figure, a reproduction of the classic Mego Action Figure.
• Spock's stand-ins for the various graphics are from my Spocklection (Spock + Collection = Spocklection, yes I make up goofy words), the one above is the 9 inch Playmates Toys Spock from the 90's.

Here are the Locations:

I'm sending Spock to Canada first and he will be working down into the States from there. I'm thinking just these locations will last the summer, as Spock will most likely spend a week at most locations, a little longer for hosts that are taking him into multiple locales, plus there is transit time. Since we are taking hosts as we go this could stretch out longer!

So keep an eye in you email for your Spock Notification, and check back here as we get reports of Spock's Travels, and as always, Live Long and Prosper.

UPDATE: Another State jumped on board last night, North Carolina, thanks to Darius over at Adventures in Nerdiness. Darius also did a really nice write, go check out his blog! Thanks D!
Posted by chunky B at 3:22 PM

THis is so inventive! I love it. Can't wait!