Spock's next stop was in Englewood, Colorado with his host Slick McFavorite and Mrs. McFavorite of the Open Your Toys Pod Cast. You should give them a listen, I like to listen while I'm working on projects, lots of info on toys and pretty funny.

Spock missed out on some holiday celebrations so the Mc Favorites thought they would let him tag along and celebrate the end of the Holidays with them and their friends.

So here's Spockcation Colorado Style. Warning this is going to be a long post... 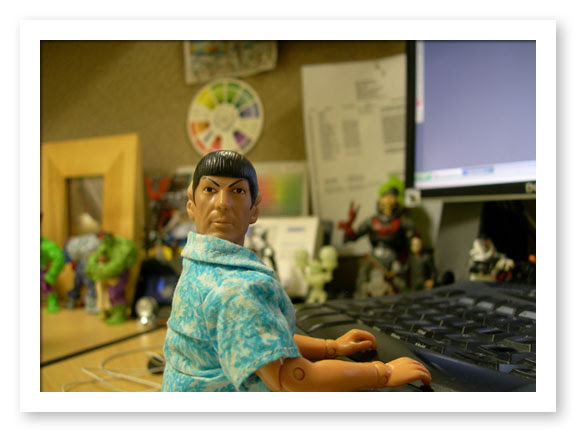 Spock had been on vacation so long, I figured I would put him to work for a little bit. 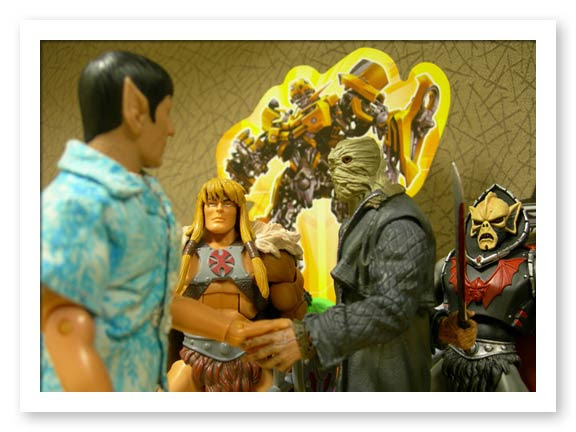 He did get to meet some of my more interesting co-workers. 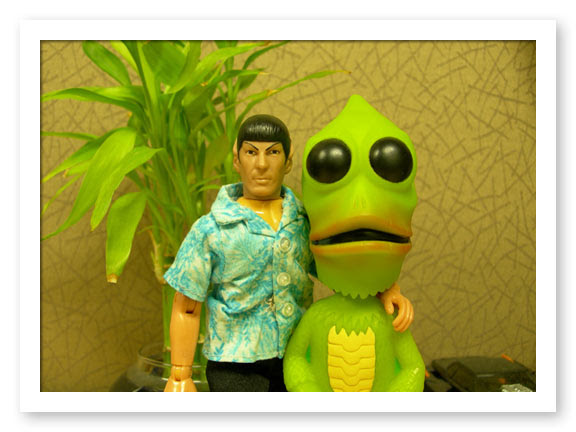 He even made a new friend. 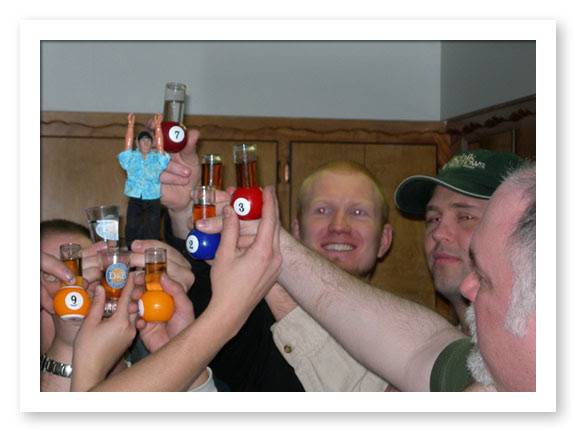 Spock made it just in time for our “Homie Christmas” where 20-30 of our closest friends gather to celebrate the end of the holidays. 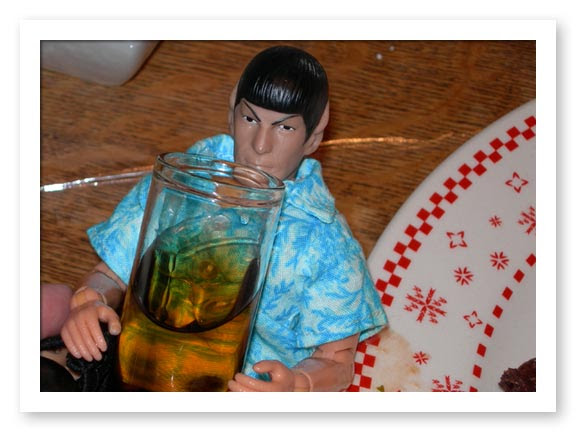 Ah, ah, ah Spock, in the McFavorite household we always take two in a row. 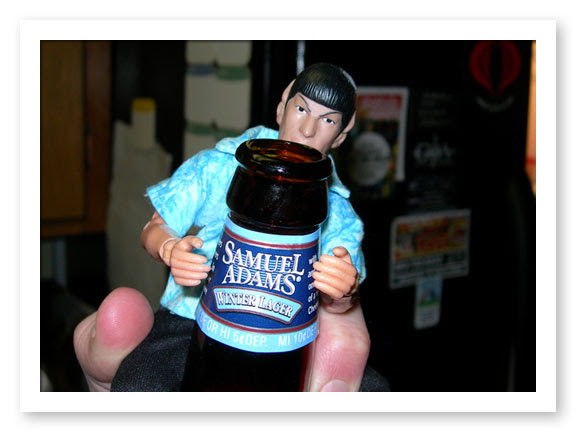 Spock then moved on to beers. 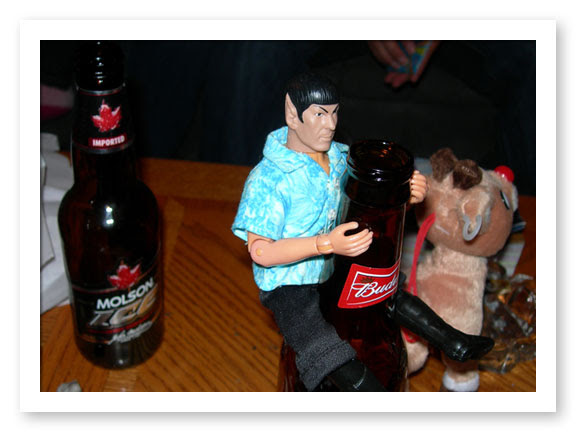 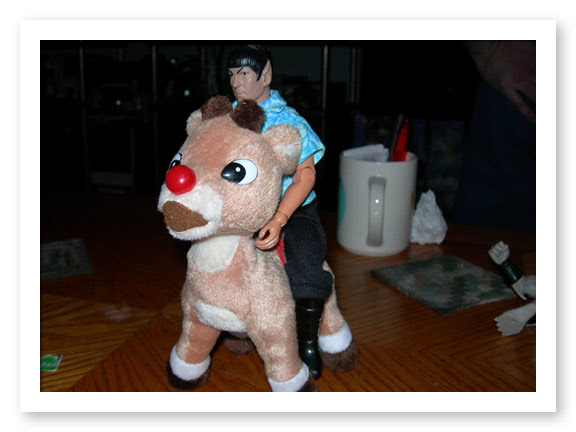 Then things just got weird. 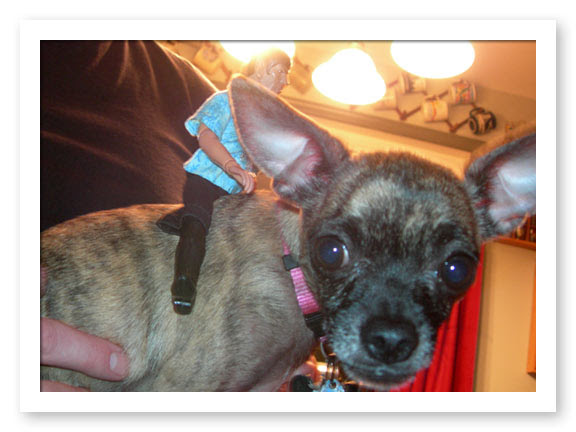 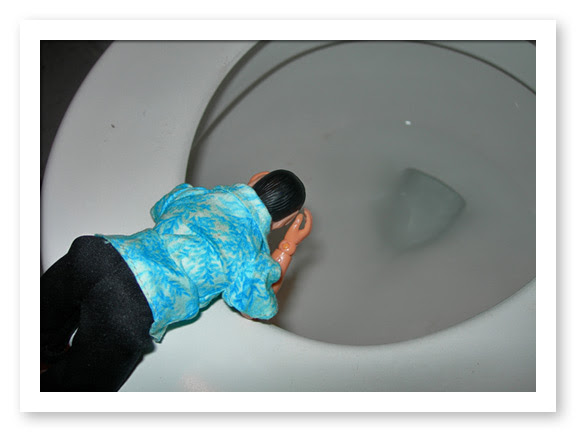 Alas, all good things must come to end. 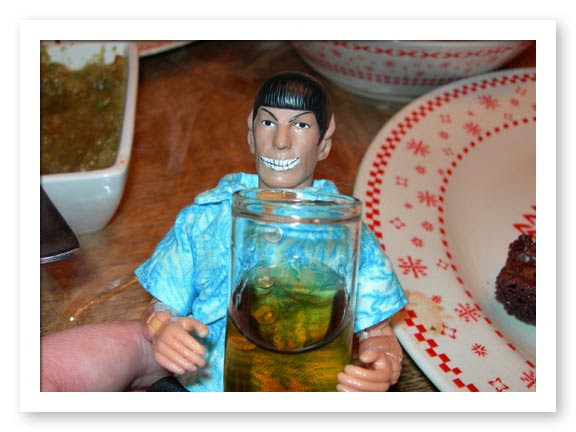 Except for when there’s shots. 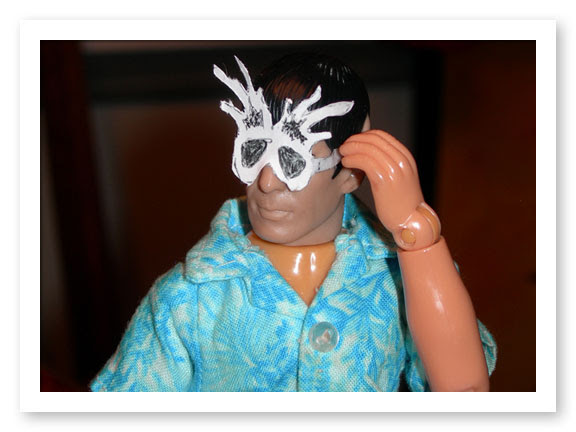 Towards the end of the night, Spock finally starting tuning on his mojo. 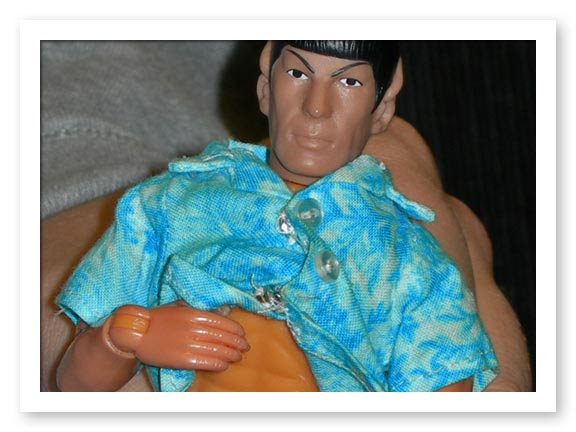 He definitely knew how to attract the ladies with his “Situation”™ 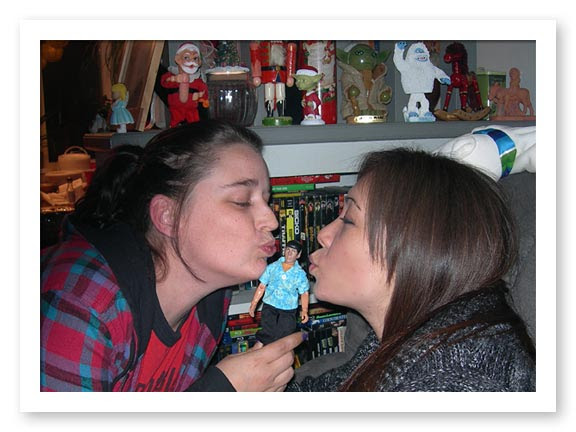 Here are two of his biggest fans. 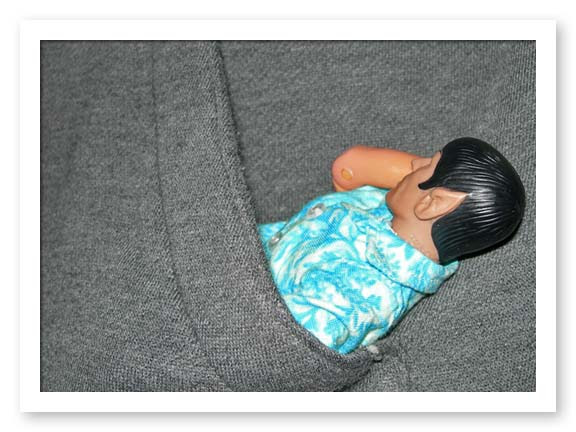 After passing out before the rest of us, we debated whether we should shave one of his eyebrows off. 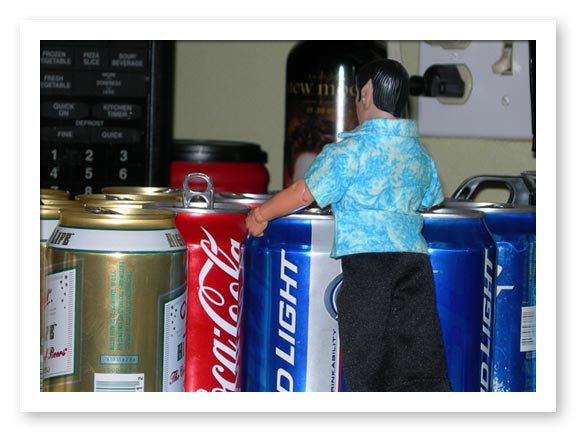 Being a very gratious guest, our favorite Vulcan visitor helped clean up the next day. 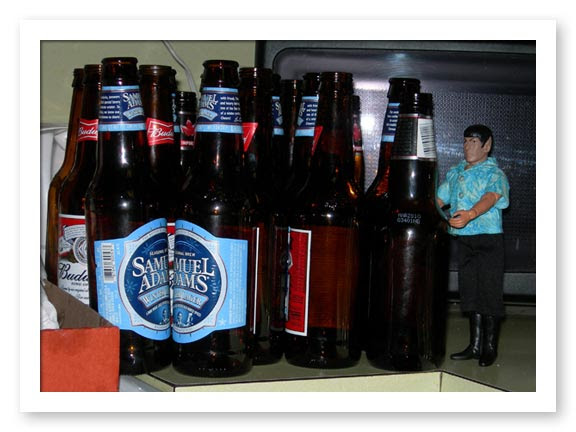 And it was definitely a big job. 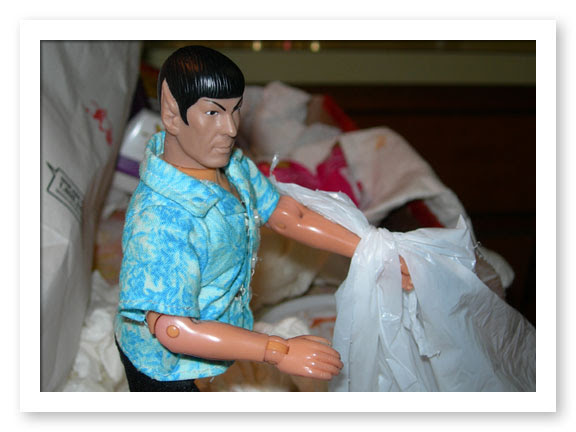 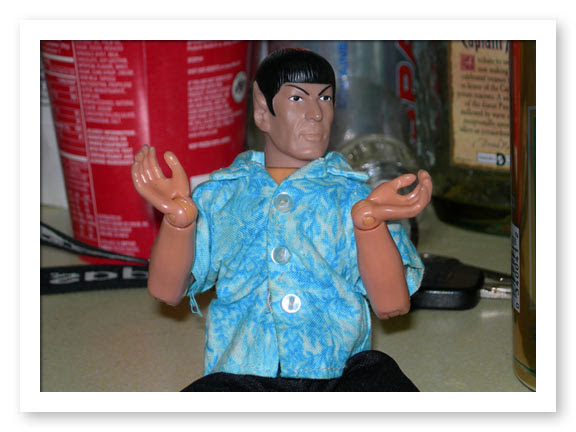 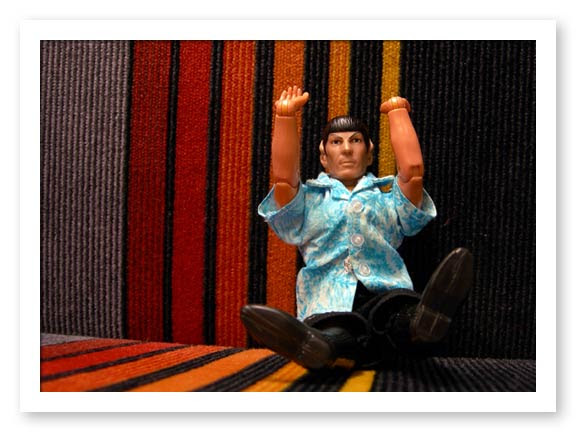 Spock really enjoyed riding on our primitive mode of transportation called “The Lightrail”. 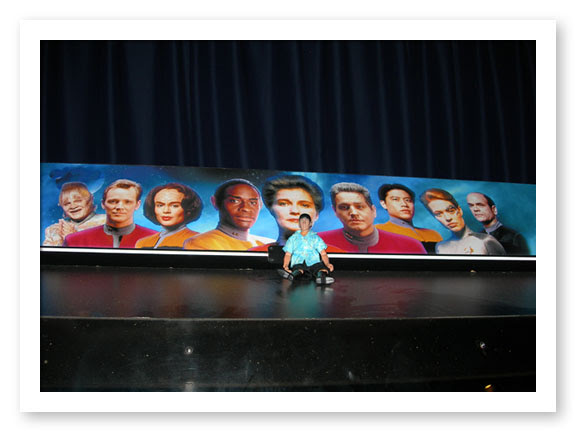 We made a 1uick stop off at Dave & Buster’s to play his favorite video game. 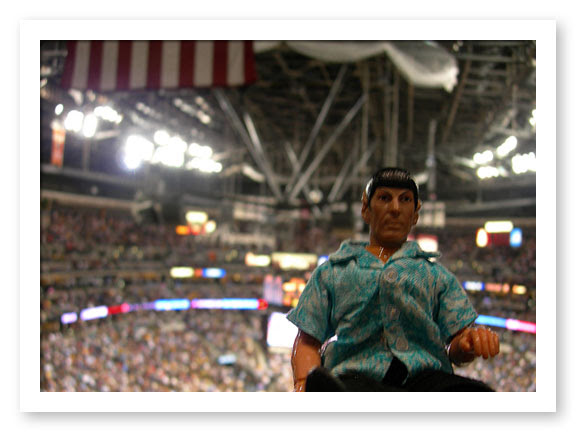 Then on to a Denver Nuggets back game. Yes Spock, our seats are way up here. 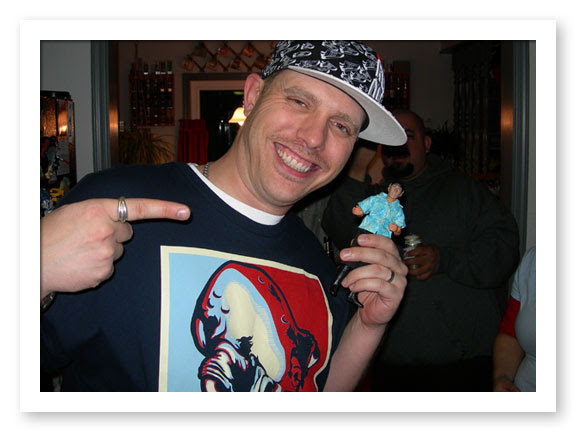 All of us will definitely love hanging out with Spock and all ready mis him. (Well may be not that guy in the back.) 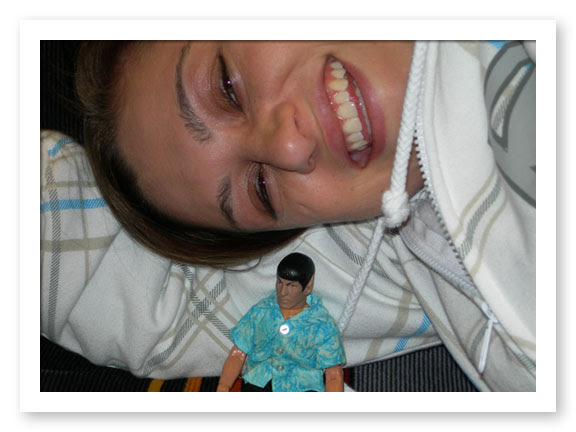 Thanks again for visiting us here in the Mile High City.
Live long and prosper…Slick McFavorite and Mrs. McFavorite!

Thanks again Slick McFavorite and Mrs. McFavorite for hosting Spock and showing him a good time in Colorado. Some interesting things must have happened at that party, I actually received an email from Slick McFavorite after he sent these photos stating he had some not so blog safe photos coming my way, I was a little hesitant to see this new batch of photos. Let's just say Spock got a little more friendly with a few of the guests.

Spock's next stop is Kansas! I've seen the pictures and it looked like a snowy good time! So, until next time, Live long and prosper and Viva Spockcation!
Posted by chunky B at 6:00 AM

hey these set of photos and stories are very interesting.

I think Spock is going to need a disinfectant bath by the time he gets to me... some of the places he's been look a tlittle dodgy.