It's time for a Cantina Crawl! 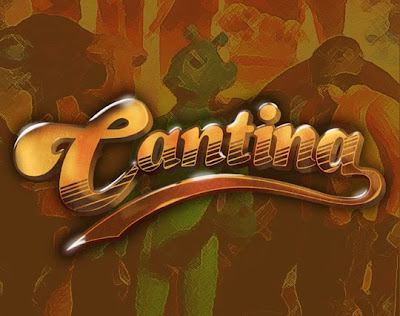 Making your way in the galaxy takes everything you've got
Taking a break from all the wookies , sure would help a lot

Sometimes you want to go

Where no one can pronounce your name (bumm, bumm, bumm)

and the drinks all look the same. (bumm, bumm, bumm)

You wanna be where droids can't go,
and some aliens have big fangs,
You wanna go where no one can pronounce your name.

Cantina Crawl is filmed in front of a live audience... 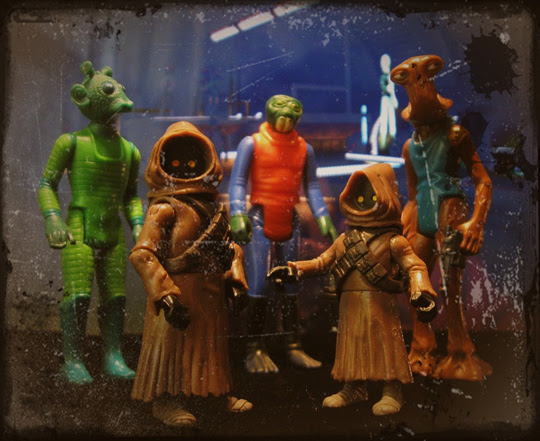 Reis sent his in almost the next day! I am really digging the vintage look to the photo on this one, when I asked if Reis was working some Photoshop magic here he sent me this cool link to the app he used to create this!

Matt once again sends in this great picture of all his aliens, he mentioned that he at one time had more Star Wars based aliens but they were out drinking at another bar when shot this photo. He did throw in a few other Star Wars characters and I have to say I am a little jealous of that Thanos. 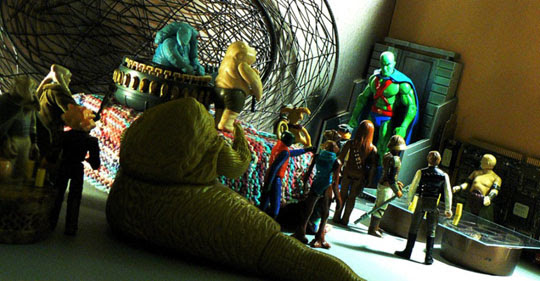 Colin sends in this one he titled "The Stranger" (getting all artsy on us here) I have to say this is my favorite of the bunch, it looks like the Star Warriors were totally taken off guard with the Martian Manhunter's entrance.You can here the record skip...brrrrrrrrp.... when the door swings open. Or did he just phase through it?

The next five pictures were sent in by Victor. Actually Victor sent in a lot of pictures, so many that they crashed my phone when I casually checked it in the morning, but no big deal, there was a lot of good pictures to look at when I got it working again. I narrowed down the selection to my top five from all the ones he sent in, I like how he has all these little "conversations" going on at the local cantina. Looks like the Rodians have taken over duty as bartenders as well. 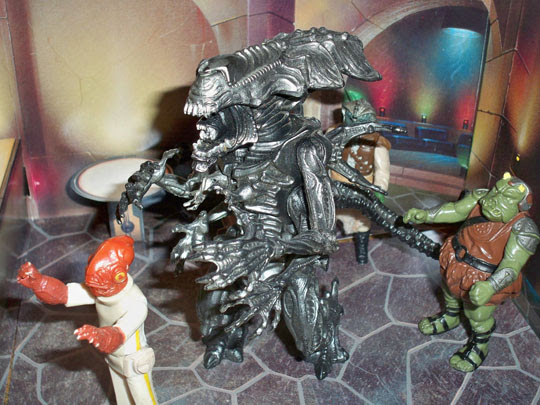 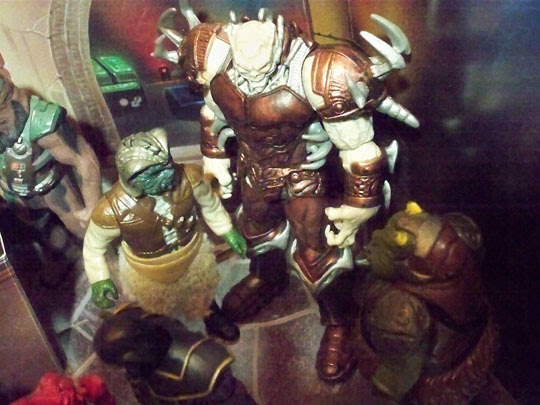 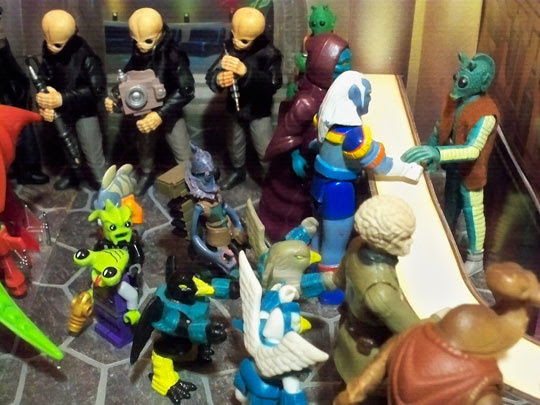 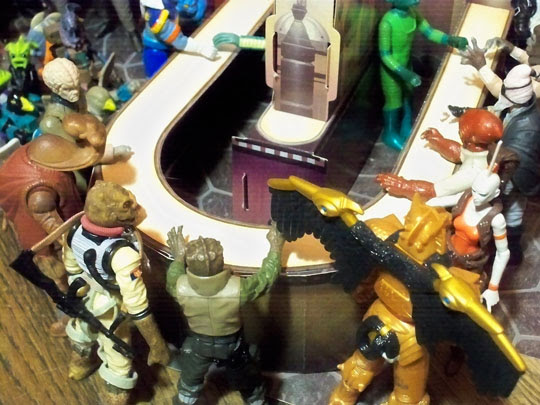 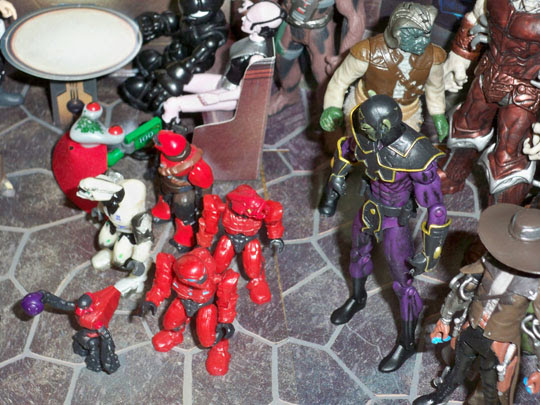 Next Doc Atomic sent in DROIDS! Your droids we don't serve their kind here!

I'm kidding, I know these are aliens but Brian explains it better... you know something I just realized I do not have any Doctor Who in my collection... 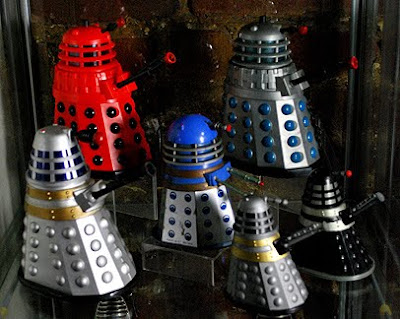 The two in back are talking Daleks by a company called Palitoy; the one large and two small ones in front are by Marx's British division. The large one is battery operated while the small ones have a friction mechanism.

Finally, the Dalek in the middle is a wind up version by the company Cowan de Groot -- a.k.a. Codeg. It's the rarest of the lot, and definitely my favorite. When it's wound up, the toy rolls around, changing direction, while the eye stalk swings side to side in an eerily life-like way. Cool!

For anyone who doesn't watch Doctor Who, the Daleks are aliens, not robots. The outer mechanical part is sort of like an armored suit; inside it sits a small, shriveled up mutant of an alien, one that's hell bent on taking out everything in the universe. :)"

Finally here's my submission. I tried to keep it simple this time, plus for some reason I kept putting off my photo shoot till the last minute and failed to drag out ALL my aliens... Oh well. 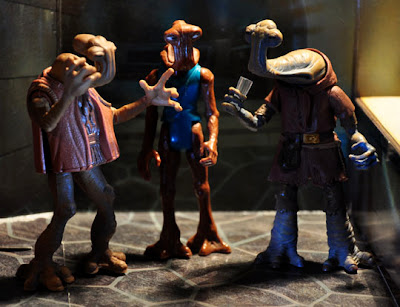 I am sure like everyone else there are scenes in the original Star Wars that stick in your brain, the Star Destroyer fly over, the first ignition of a lightsaber, Stormtroopers blasting through a hallway of Rebels, the list goes on and on. To me the Cantina is one of those scenes, I will admit until about age twelve I honestly believed that all bars will filled with these wonderful creatures, imagine my surprise when I was old enough to actually go into a bar and discover there were just people in them... who knew. Back to scenes sticking with you, when I saw Hammerhead's appearance on screen (even though it was a quick one) I was floored. "What the heck was that my eyes just saw?" My mind couldn't grasp what he or she was, I just knew it was the most awesome alien I had ever seen.

To this day when someone mentions the Cantina scene Hammerhead is the first image that pops into my mind. So, when I picked up my first cantina alien it was that fellow in the middle "Hammerhead" and immediately he was my go to alien. I took a shoebox and built my own cantina so he and his buddies could have a place to drink. I would take my little 45 record player and place it behind the box and play the Cantina song over and over again, must have drove my parents crazy. I was all about creating the atmosphere when I played Cantina. Isn't it weird that we got a set of Bar Flies and not one but two Cantina playsets back then. I always wanted a proper Cantina playset, but I settled for the shoe box. I may have to rectify that.

Next, the guy standing picture left recounting his day to his fellow Ithorians was a Christmas present from my wife back in 1996. It was a big deal at the time because they just released the series that included him and they were going to phase out the orange cards. I opened him up on Christmas Eve, weird how you remember that stuff. The one on the right was a later purchase and is pretty much the best Momaw Nadon out at the moment. Highlights with this guy include his favorite drinking glass and he came with an Ithorian Staff and a small Cantina table.

I cannot tell you how excited I will be to see a new version, if it is ever released, on the new vintage cards, my fingers are crossed that we get one. That was fun and keeping it simple by spotlighting my favorite Cantina Alien brought back some nice memories. Lets raise a glass to all the aliens above! Great job everyone and thanks for participating!

What's next? I am thinking this will be a monthly feature from here on out, the next one being in May. I will announce the theme and deadlines around the first week of each month. So keep checking in for the next theme and due date. Happy Friday everyone, be safe flying home from the Cantina and remember to tip your waitress.
Posted by chunky B at 6:00 AM

No blasters! No blasters! What a great series of pics! What is that cantina playset in Victor's pics? It looks like some sort of papercraft thing.

Love these pics! Thanks again for hosting, Chunky B!

@Reis- It's a mail-away dio that was offered by Kenner and later sold with a Sandtrooper by Hasbro. If you look around you can find one for around $10 on eVilbay. Love you pic btw!

@Chunky B- Sorry about crashing your phone! As you can tell I had a lot of fun with this photo assignment and I can't wait for the next one. And don't feel bad about not having any Daleks. As a new fan to the series, I'm itching to get some but they're a bit pricey for my wallet right now.

@Doc Atomic- Classy photo. But I have to ask, no Dapol Daleks?

I always loved how the Hammerhead original release was wearing what looks like an intergalactic space teddy or bathing costume.

@Reis - It's a sweet paper fold out diorama like Victor said, I picked mine up with the Sandtrooper, they also had a Jabba's Palace one, which for some reason Mine is missing...weird, looks like I will be searching on the bay with you.

@Victor - no worries on the phone, I don't think I will be getting any large Daleks, maybe just a small one when I see it, also even though they are aliens I may display mine with my robots,LOL.

That was FUN! Everyone did greaat again, all around! (applause!)

Awesome pics, everyone. This series just gets better and better!

@soundwave810 -- Since I don't have enough space to collect everything, I generally limit myself to just vintage toys. Plus, there are just waaaaay too many Dapol Daleks. My toy room would be overrun by the sociopathic little buggers.

i don’t have that amount of aliens creatures (not bots) in my collection right now... so i should b more lucky with the next assignment =/

Great pics! Bummed I missed this one, but I am no good with deadlines. Hopefully I can catch the next one!

Amazing display of cantinas. Everyone did a terrific job!