Sorting it all out

I debated posting these, I shot some really crappy phone pictures so I could show a friend what my latest action figure project is, then I thought might as well, you will get the idea of what I am trying to do here. 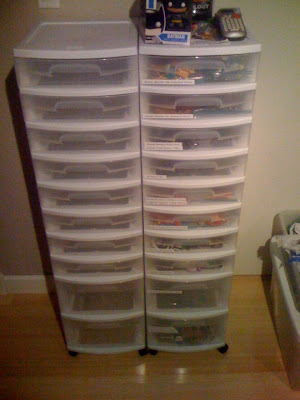 Here's an overview so far. I have about 6 to 8 totes packed with loose toys, they take up quite a bit of space in a spare closet, along with some totes of stuff I plan on opening and stuff I plan to keep packaged. Anyway, it is a pain to dig out a tote, especially if it is on the bottom of a stack of four and then get it situated so I have room to dig through it to find the figure I want to snap a picture of. I would love to have the room to display my entire collection at arms reach, but that is just not possible, so I end up rotating stuff out (not as often as I would like).

I broke down and passed on a Lego set I had been wanting and purchased a few of these pretty standard drawer units. I started with two and then two more... wait what? You say you only see two in the photos, oh that being pretty modular I have taken the first two apart, re arranged the order of the drawer units and snapped them all back together, I know nothing special, but it does give you a pretty decent height for the whole unit. So, these started out as five drawer units, with four shallow drawers and on larger drawer at the bottom. They make these things in all sorts of configurations and sizes, I found these to be the best for what I want to do. My goal is to maybe have 4 to 6 of these towers, I am really hoping for only 4, I think at some point I need to grow up a little and let some toys go... did I just say that? 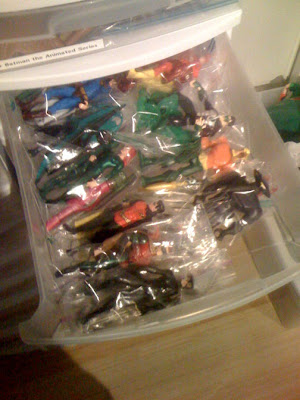 Here's a peek into one of the drawers of the unit I am calling the DC Tower, okay I will admit at the bottom I might throw a few of my Marvels in there, it's a work in progress. For the most part this is all my DC figures except for any Batman figures. Batman may need his own set of storage drawers. I have decided on some figures, ones with tiny accessories I need to bag them. Instead of dropping a ton of money on action figure baggies I went with the local store brand sandwich bags. To me they are pretty much the same, maybe a little lighter mill. I also decided it might be wise to use a hole punch and make a little vent hole in the back, small enough to keep accessories from falling out, large enough to vent. My thinking here is to try and keep the figures and their accessories together and hopefully keep some of the plastics from cooking in their own juices. This may or may not work.

The shallow drawers will have very limited stacking and the larger drawers will have the most, but still far less digging than say a tote and hopefully in the case of the JLU figures that seem so easily damaged by storing together they will not be under the weight of fifty or more figures stacked on top of each other. 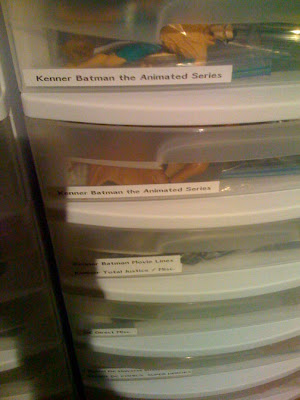 Finally, organization! I figured why not make it a little easier to find the toys I am looking for. This is the part of the project that is taking the time. I borrowed my wife's label maker and got to labeling drawers. I tried to keep the line name and the manufacturer all in the titles, but as you can see with the open drawer picture I do have drawers that contain mixes. I tried to label these with a few different descriptions or labels. I also found that I have more multiples on certain figures and figures I no longer really want from doing this, so I will be compiling them to send to friends, blogger buddies and post a few on eBay. Remember I am trying to cull the collection to a more focused collection. So with the DC Tower near completion, the empty one should be large enough to house my GI Joe 25th Anniversary figures plus Indiana Jones and maybe a few of the minor lines I want to keep. I think Star Wars may fill two of these by itself. Plus I do not know how I want to organize the loose Star Wars collection. Decisions, decisions...

Well, I know it's not the latest greatest toy or a crazy shot with a vintage Chewbacca, but it's what I have been up to lately. I will show more of this project as well as the others I always seem to have going as I get further along.
Posted by chunky B at 8:00 AM

I have something similar in my closet. Except it holds pajamas and sweatpants. :D

Great organizing! This is the way to do it!

I like this! But have no where near the amount of action figures to fill even 2 drawers so now i have something to strive for lol.

Looks great, I am jealous, I need to put new purchases on the back burner and start building something like this. I am so disorganized. I have toy lines split up in so many different places, I barely know what I have anymore

i got some of these myself this winter, and i love 'em... need a couple more LOL!

I think you've done a great job of organizing your figures!

However... Sandwich bags are the WORST thing you can store your figures in. Punching a hole doesn't really help -- it's contact with the plastic as much as fumes that causes all the damage.

These bags are chemically volatile -- they react in horrible ways to the plastic in the action figures (which is also of a generally cheap nature). Pricier archive bags, on the other hand, are more chemically inert and therefore much safer. (The thickness is an added bonus, but really isn't the chief selling point.)

When I talk about archival bags, I mean comic book bags... Preferably Mylar ones, which are probably the safest transparent bag you can buy.

The best material to use for figure storage is, I think, Tyvek. This is the same material they make express mail envelopes out of -- also some CD sleeves. It's more chemically inert than Mylar, and it's super durable (seriously, trying to rip the stuff just isn't worth the effort). Museums use Tyvek envelopes to protect archived documents and other items. Good stuff!

The catch is that it's not transparent, so you'll need to label them.

The guys on Rebelscum have had a few discussions on this topic, and it's worth searching the forum for the threads. I'll try to dig up some links...

So Tyvek seems to be the best bet, Mylar is pretty good, other comic book bags are decent. But seriously, for the love of god, don't use sandwich bags...

Good to know, thanks Doc! I'm off to hunt down better alternatives.

If I can help save one action figure's life, then I've done my job. Heh.