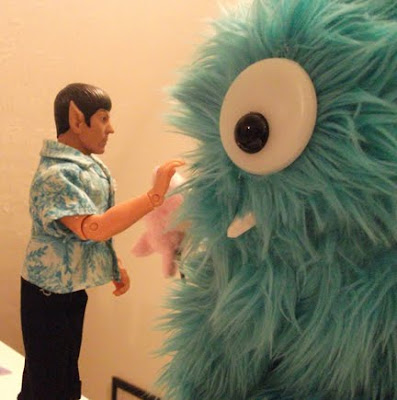 First I just want to say, where do I sign up for service in Starfleet, I mean besides the obvious dangers of being a red shirt, the vacation time alone is out of this world and well worth the risk. Spock has been on vacation since April 14, 2009... TWO YEARS THIS YEAR! Actually over two years since this post is coming after the anniversary date.

Also, Spock's last host Liz sent us an out take which you see above, if you haven't visited her sight go check it out, Liz is a puppeteer, a TIE fighter pilot and a Ghostbuster just to name a few of her talents!

So with this update I thought until we receive some fresh photos I would drop some Spockcation knowledge on you...

Spock has visited 18 states and Canada. Spock has actually made his way into Canada with two different hosts.

Spock has had multiple stops in the following states so far: Florida,California, Illinois and Georgia.

Spock's longest distance he has traveled is still an estimated 3316 miles from Boca Raton, FL to Seattle, WA.

Spock's shortest distance he has traveled is still an estimated 11 miles in California. There was runner up that may have beaten it if you count not actually going from door step to door step.

Spock was actually hand delivered from one host in Georgia to another, how's that for bringing people together.

Spock has been traveling for 2 years and 13 days, more precisely 743 days.

Spock has 9 more stops in his trip, he's almost home!

Spock's estimated return to his home state is August 2011, looks like we didn't make that November 2010 deadline.

Spock's vacation shirt, which looks like it's holding up rather well, was custom made for him by my mother... yeas my mother made a shirt for my dolly... which I still maintain is an action figure!

While Spock is enjoying his travels he wishes he would have taken a Shuttlecraft to get from stop to stop.


Spock is still going strong. I hope he makes it back before the release of the next Star Trek movie. My finger's are crossed that he does, I still need to show him around my home town for you guys and gals.

Live long and Prosper.
Posted by chunky B at 6:00 AM

I have to say one thing. Your mum is amazing! The Shirt look so cool!

Wow amazing he has been on his journey for so long and still going. He needs his own Travel Channel show lol.

That's incredible! You are really going to have to have a special homecoming when he gets back to Eclectorama HQ.