Not often I have one of these, but I had pretty good luck this weekend and found some cool things.

First up I found myself near a Toys R Us that we do not often find ourselves near, this one is located in the big city, anyway on the pegs were about 20 Captain Colds and one lone Flash figure. The thing is his card was destroyed, the bubble was being held on by two pieces of scotch tape on one side, what was left of the original heat seal on the other and the top of the bubble was open to the world. I figured he was either A) a return from a child's birthday party, it was opened and then decided upon it was lame and returned or B) someone really wanted to see what it was all about and ripped it open in the store. Either way since Flash doesn't have any accessories and the rest of him seemed in tack, I bought him. That is how bad it is around here folks, you buy them when you see them, no matter the cindition. Now I will admit I was going to open him anyway and I did feel a little cheated, but at least I found one in the wild... The Action League set was from a trip to Wally World, I was in a Flash sort of mood and wanted to round out the Flash collection a bit. 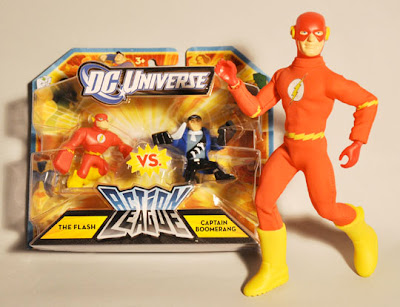 This next set of toys is from a trip (or two) to the local Grocery Store, well let me back up. The Lego TIE Fighter was from the same trip to Wally World as the Flash Action League. It looked like it was meant to be an Easter thing like Target does, they had the X-Wing (which I already had) and the TIE. These were all tucked away in the very back of the Lego aisle. I had to have a small Lego TIE. Okay now, the two figures were from the grocery store trips, I picked up the Stormtrooper because I have this sickness that compels me to pick up two of certain figures, like Stormtroopers, Jawas, etc. Sort of a mini army builder I guess. I just had to have two of these to put next to one of all those Darth Vaders I have laying around. R5-D4, might live on the card I haven't decide, I sort of dig those Star Wars cards. Now, I'm a little ashamed here as I had already picked up the Luke from this set earlier in the week and I also picked up another "big head" Han Solo, I don't know why besides I wanted another one of these Han Solos for something. I couldn't help myself. STAR WARS! 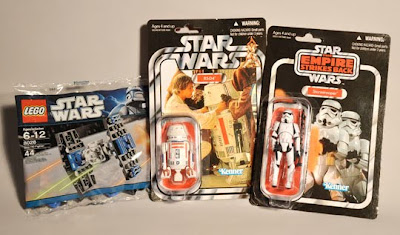 This last one is from the Toys R Us trip as the Mego-Like Flash, which I should call the "Mr. Miracle Flash" as he was trying to escape that plastic tomb all those Captain Colds put him in (for the record I passed on Captain Cold this round). Anyhoo, check this out, they make a freaking Red Porsche 914! I found out that there was a red one and a mustard yellow one a week or so back. I told myself that Toys R Us is the only place I will ever see the red one and if I am near one I was going to check and they had one on the peg. Again the package is in not so hot shape, but I plan on opening it up anyway. I just wanted to shoot a package pic for all my die cast readers. The mustard yellow one comes in one of those multi packs. I have a plan for that one since I am only interested in the 914, that will be revealed later. It's not illegal, I am not going to swap out a car. Gesh people, my nephew loves die cast cars so he will get all the extras, see now you made me spoil the surprise... 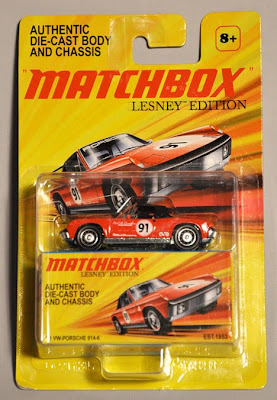 I think that about covers it, plus I think I have pretty much used up my toy karma for the next month... plus maybe my budget : ) I do have some Spockcation pictures to post this week, an awesome box of toys Jboypacman sent last week I need to post (sorry Jboy I'm getting to it) and wasn't there something else? Oh yeah the Cantina Crawl! I still need to shoot my entry! Have you shot your's yet? Oh, and welcome to the new followers... er I mean eclectomaniacs! I woke up Sunday morning and had 67! Sweet!
Posted by chunky B at 6:00 AM

These Mego throwbacks look great, and that Flash is no exception! Good of you to take it in Chunky!

lil’ toys r for some collectors (like us) just like candies for lil’ kids, u can have enough of them, they’re so addictive... BTW, i saw here one of those lemon green Porsches, unfortunately it was a bit scratched =(

I have yet to see a Flash or Captain Cold locally. Heck i haven't even seen a Batman yet! Not that i have the money at the moment but still lol.

No worries on the picture of the things i sent you when you get a chance. : )

Seeing this flash remind me of Sheldon cooper from Big bang theory costuming as flash. LOL

Sweet Flash!! I still haven't seen this wave, locally, either. Strange that yours was torn open. Glad the figure was fine, though.