Show Me the Droids! 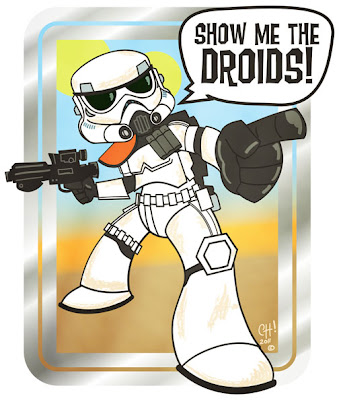 It's finally here and what a fun ride it has been, well on my end. I have always loved seeing pictures of people's collections so I figured this would be a neat little project. I'm glad to have opened it up to all robots, I know it started with just an R2, but hey they are all mechanical brothers and sisters, so without a lot of jabbering about binary load lifters lets get into the pics... Show Me the Droids! 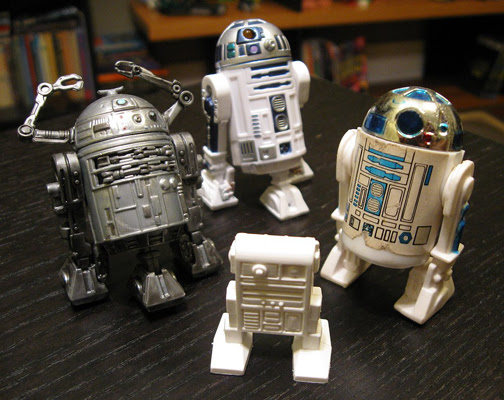 Name: Reis
Favorite: "All R2s. And that little guy is technically an R2 knockoff from Galaxy Laser Team, but I've always loved him." 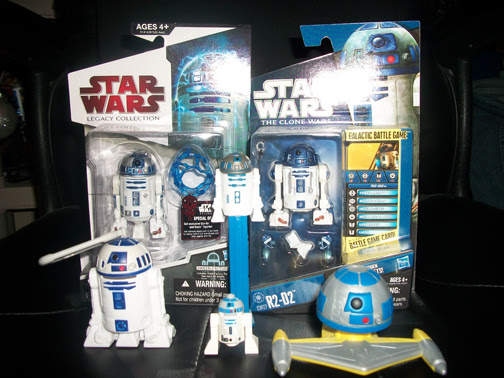 Name: Matt
Favorite: "My favorite R2 from the photo is the Clone Wars action figure just because it looks the coolest." 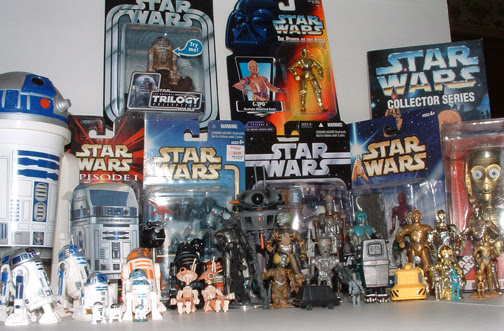 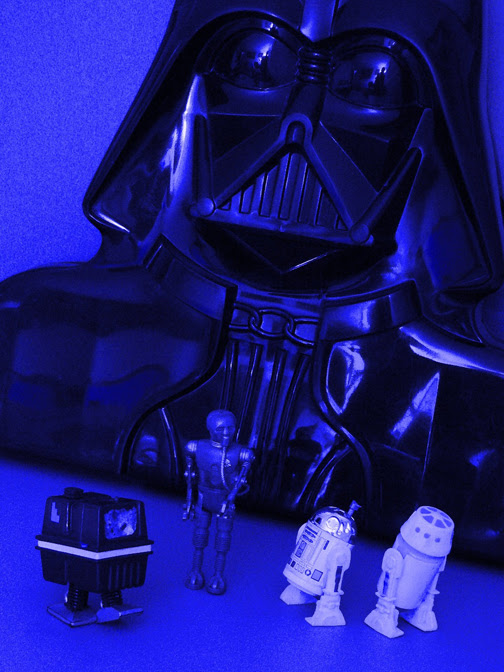 Name: Colin
Favorite: "Please accept my humble offering of the only surviving droids of my childhood :)" 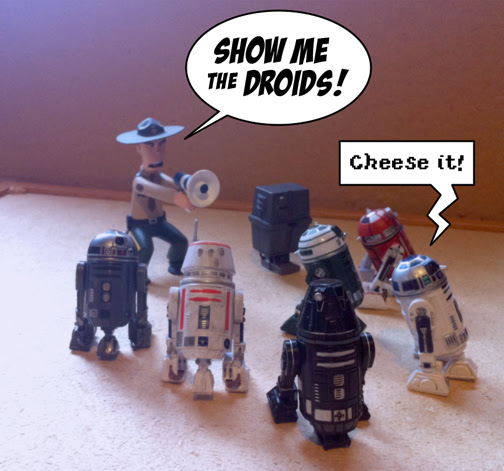 Name: Jeremy
Favorite: "My favorites so far are the R5-4D and the Gonk droid. I just wish the Gonk had more painted details." 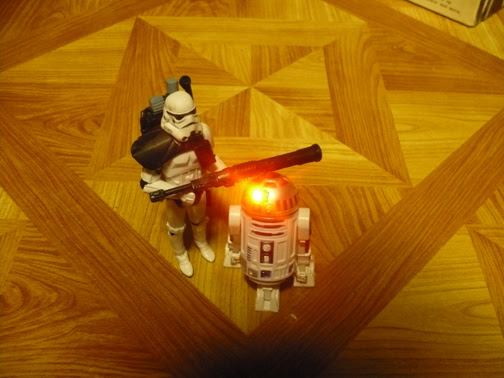 Name: Jason
Favorite: "my one and only Star Wars Droid, R2-D2" 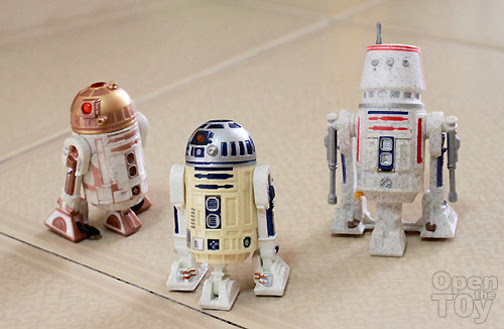 Name: Leon
Favorite: "3 of my favorites Droids from 3 different era packaging. One from Kenner another 2 from hasbro. :)" 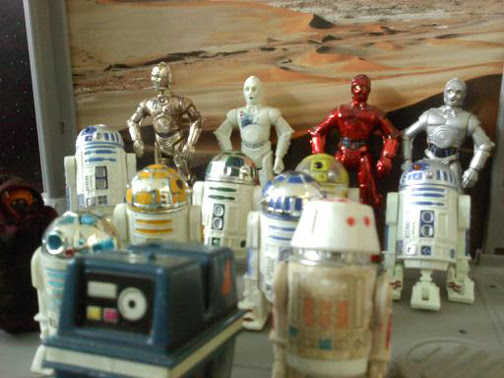 Name: MOCK
Favorite: "My favorite is probably the red 3PO unit. A while back I tinkered with the idea of customization and painting figures. Droids were both the easiest and hardest to do. You can see a few attempts in the photo..." 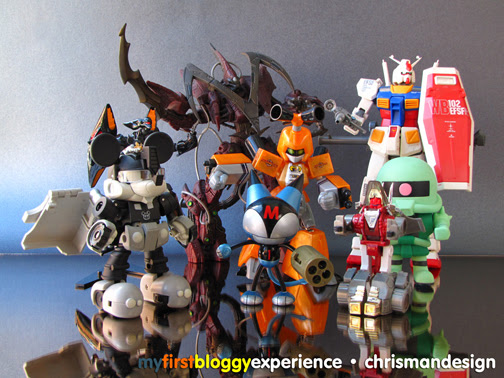 Name: Christiam
Favorite: "OFC they aren’t SW related but i love’em, all of them (that’s why any of them is marked specifically)...
Greetings from Colombia !!!" 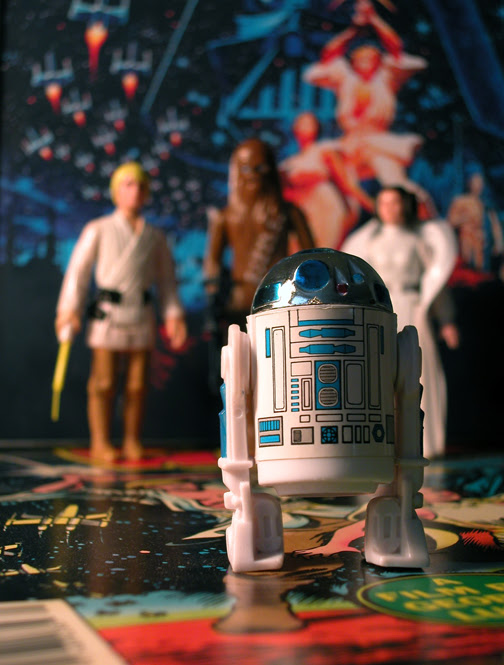 Name: Brian
Favorite: "The original Kenner R2D2 is my favorite R2 figure of all-time. He
may not be screen accurate but he was part of that magical first Star
Wars action figure commercial for the Early Bird Figure Set. At a
time when Star Wars fans only had comic books, calendars, and trading
cards, these figures were a promise of many great things to come.
This R2 has a very strong association, for me, with the earliest days
of Star Wars and wonderful memories of childhood." 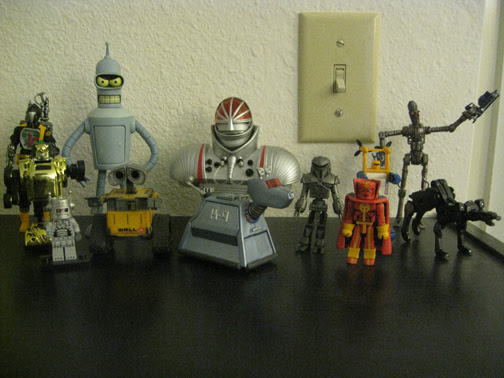 Name: James
Favorite: "My favorite is
probably the Wall-E figure as it looks very accurate yet has an insane
amount of articulation, so it's an insanely fun toy to play with." 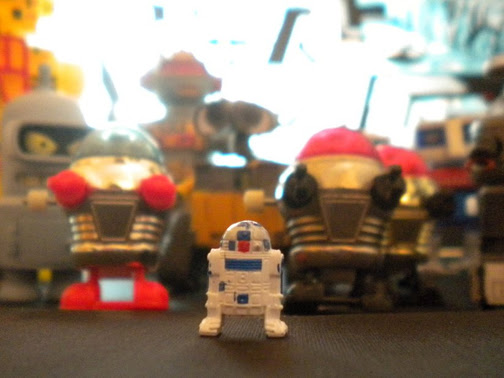 Name: Ron
Favorite: Ron didn't specify so I am going to have to say they are all his favorite, that is an awesome group of bots! Name: Mario
Favorite: "Here's my contribution to Show me the droids! I decided to stick with astromechs only for the picture, for simplicity's sake. I think my favorite of the bunch is R2-B1 (the blue and yellow one with a grey dome in the second row). Mainly because I like the blue and yellow color scheme, even if drink carrying Artoo is the most versatile of the bunch." 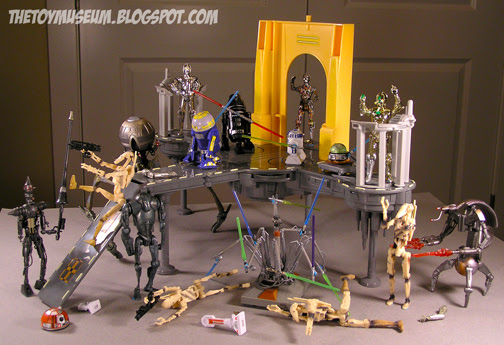 Name: Dan
Favorite: "I like the Jedi Treadwell Droid" 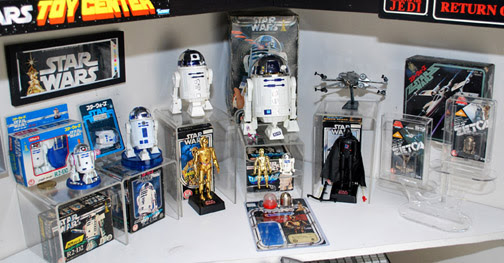 Name: Doc Atomic
Favorite: "Takara SW collection, made up mostly of droids. They're all from Japan; some are die-cast and fire missiles, others are remote controlled, and one has bump-and-go action! Collectively, they're some of my favorite Star Wars toys ever. However, if I had to call one the tip-top favorite, it'd probably be the wind up R2-D2. It's a tough choice, but I'll go with him." 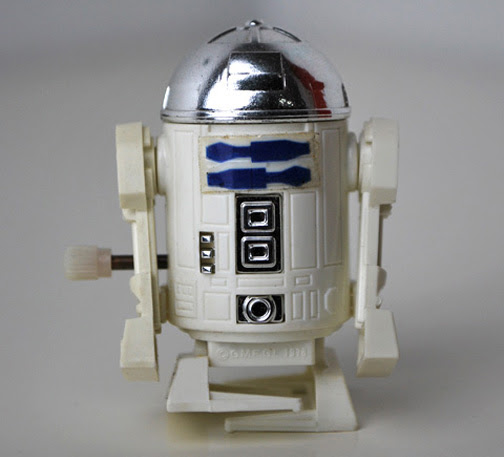 Detail of the Windup R2-D2 from Doc Atomic. 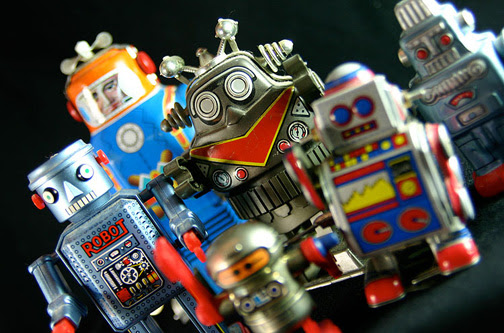 Name: Brian
Favorite: "These may not be the droids you are looking for, but they're some of my favorite ones. Most of these are all reproduction tin windup robots, and my favorite one is the orange-headed guy in the back, solely because he has a propeller on his head that spins around." 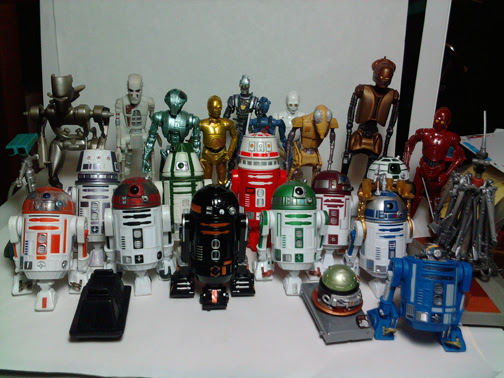 Name: Victor
Favorite: "...my droids collection, R2-Q2 is my favorite because he's black and it's radio controlled." 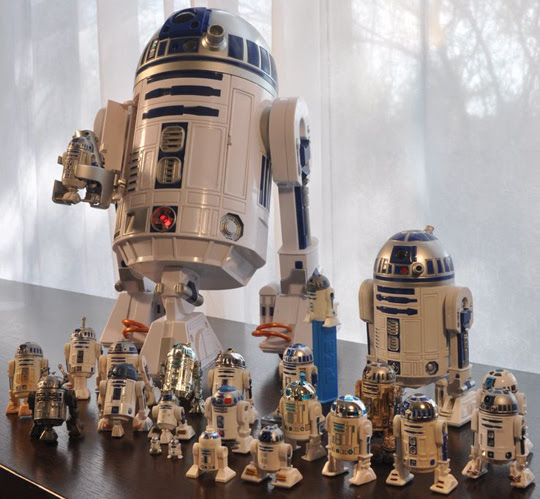 I decided to just show my R2-D2's. So here we go...
I'm Charles, these are my R2's, my favorite is being held by the large R2 in the back, it's the Tomy Remote Control R2-D2 released around 2005 (Hasbro recently released these over here in stores, but this is the Japanese one) I like this one becasue how cool is it to finally get a 3-3/4 scale figure that actually moves and beeps.

This was a blast, so much so I decided to do another, tune back in tomorrow for the announcement. Also what do you think of making "Show Me the Droids!" a reoccurring feature? Like maybe a couple new entries featured each month. Leave a comment.
Posted by chunky B at 6:00 AM

what a delicious scene !!! the paradise of robots.. what i like the most r those bots of Brian (very old-fashioned) & those big R2D2s in the final pic from Takara... bout another show me the droids!... nice idea i will try to choose another bots from my collection =)

Damn- I am IMPRESSED! There's some stuff I've never seen there. That was fun, Chunky- didn't know they MADE that many R2D2 toys!

This was fun! I had to take many pictures to get the light on R2 to show up in the picture. Thank God for digital cameras. I probably would've used half a roll of film for this. Then again, without a digital camera, how would I know if I got the shot right? I wouldn't until I developed the roll. And that probably would've happened months from now. :)

I think it should be a reoccuring feature... there are still many undiscovered droids collectors out there! :)

This turned out really great, CB!! Awesome idea! I could see this continuing with different themes... heroes, villains, vehicles, etc.

Fun!! Thanks for hosting this!

Those are some AWESOME pics there! I enjoyed participating and seeing the end results!

That was great! So many different R2s (and others). If you do another of these, whatever the topic, I'm in!

Holy guacamole! What an amazing spread of droid collections! I am seriously impressed by everyone's entries.

Thanks for hosting this, Chunky B! Not only are you the king of Batman figures, but apparently the king of R2D2s as well. ;)

This has inspired me to pick up some more astromech droids. They're cute little buggers.

Those R2D2 are super gorgeous... I still don't have R2D2 in my Star Wars collection - still hunting now... sigh... If I were to joined this, I don't have cute droids, most that I have are those boring Gundams... sigh....