Honestly I am not doing this on purpose... 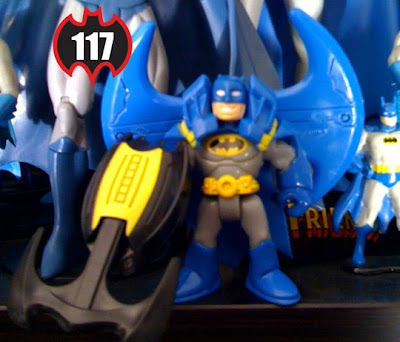 Believe it or not I have passed on this Batman figure time and time again, I just wasn't sure if I was into the whole Imaginext thing. I picked up a Joker last year it was pretty cool, then for the Battle Royal with Reis I picked up another, the gray and black Batman... you can't have a Joker without a Batman. Then a few weeks back I found a Hawkman and Flash two pack, that peeked my interest more and now I guess I am going to try and get a few more.

I was actually looking at the Green Lantern with the Jet then I found out if I had waited on that earlier two pack I could have had three birds with one stone, oh well. Also kicking myself for not grabbing the Penguin, Riddler and Two Face from the Target Easter section... doh! Oh well don't they do one of these for the fourth of July or something?

So all that said I give you Batman 117. I may need to start another shelf, but my Stormtroopers don't want to give ground. Okay I will stop now... well, until number 118 comes in the mail from a eBay purchase, in my defense I was after an accessory and another figure that came with the Batman so there.
Posted by chunky B at 7:46 PM

Email ThisBlogThis!Share to TwitterShare to FacebookShare to Pinterest
Labels: batman, Battle for the Cowl, collection

You keep this up you will have to build a "Bat-Cave" under your house to hold your Batman figures lol.

How could you have resisted these awesome little figures for so long? :) This one's my favorite. You can't beat the classic blue and gray.

Imaginext is pretty fine for me & if Fisher Price were interest in this kind of figures... i would pick up some of them =)

Oh puh-leeze! I've already had this particular Batman toy for, like, ever. Stop trying to copy my collection, Chunky B, by going for quality over quantity. ;)

Copy you? Hell Reis I actually sent you part of mine to give you some quality in that collection of yours, LOL.

You have a point. My anguish is transparent! ;)