No sooner than I leave a comment on one of Super Duper Toy Box's post do I pick up a Justice League Unlimited three pack... okay for the record I am not collecting these like I used too, but this set has a few things going for it and I had to get it, but the price, Ugh don't get me started... Mattel you bastards! I can't quit you!

First, up it's a new Batman I do not have, or a re paint I do not have.
Second, it's a freaking Batman The Animated Series Set! No Brainer.
Third, Who doesn't love a repainted Joker?
Fourth, holy freaking cow, it's the Gray Ghost, I would have never thought I would see this set ever.

Look how Happy Batman is, it's like when Bubbashelby picks up one of his all plastic dollies at a swap meet! I kid, I kid Bubba. 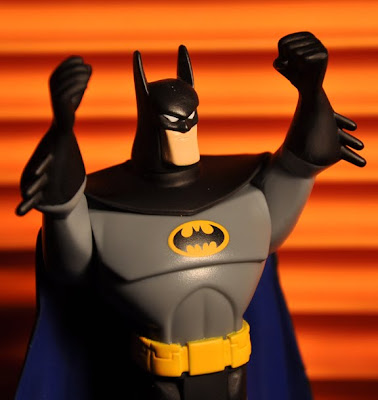 Oh Batman you will be number.... let's see, oh yeah 116! Seems like it was just yesterday I was thinking I would not get any higher than say 115... 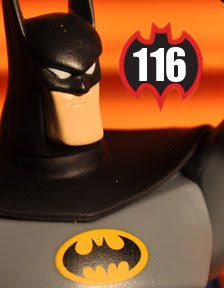 Why is Batman so Happy? Oh, it's the Gray Ghost his childhood hero, punching Joker right in the kisser! Yea Bats, yea Gray Ghost! Boo Joker. 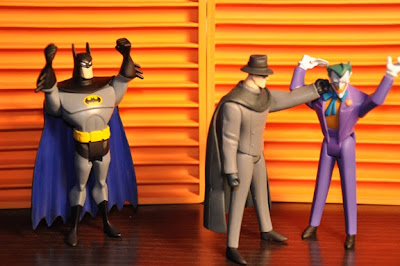 i’ve seen some of these figures around here & though they r well designed (& i do like them), the paint job is not as good as it could b... i think this line with a precise paint would b a real hit & i say: why not ??? specially with the price factor u mentioned... =O

Yep these are hitting Target stores here now along with the others you have pictured on your blog.

Congrats Chunky! I know Bubba been on the hunt for this set so i hope he can locate one soon too.

LUCKY! I so need this set!

I'll keep an eye out for these dollies for ya Bubba ; )

Don't we all want to call them Action Somethings, dolly lover : )