Stuff in the Mail! Big Thanks!

I have been remiss in my posting duties lately so today, like on Reis's blog, I am finally giving a few shout outs. First up Jboypacman has been doing some spring cleaning of sorts and has been making the USPS work for their money sending all sorts of goodies around the blogesphere. I have to say when he emailed me to let me know something was on it's way I was not expecting all the goodies he was intending to send my way, I am actually floored. I have to say, and forgive me if this gets a little mushy, but I have really enjoyed Jboy's efforts in collecting and being in on his little blog from the early days, it's like watching a little video game loving bird learn to fly... sniff, sniff. That goes for all the "newbies" out there... what a horrible term, how about "eager new collectors" ? I think they bring a fresh perspective in the often jaded world of collecting. 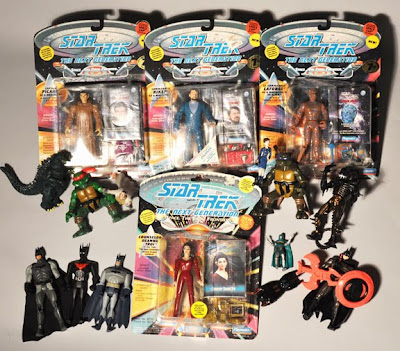 Big thanks Jboy! He let me know if there were anything I have extras of I could pay it forward to my fellow collectors, what a guy! There are a couple things I have duplicates of now, but I have to say he really knows his bloggers because a majority of the haul here is something I do not have in my collection. Oh and I had to get a chuckle because he sent me four, count them Reis FOUR new Batmans, that I didn't have in my collection... I think I will call them number 112, number 113, number 114 and number 115.

Next LEon over at open the toy surprised me with this awesome, minty fresh Captain Kirk from EMCE toys. I think this is just the greatest because he thought enough to send the good captain my way and who doesn't love getting packages from around the world! Thanks again LEon, you are the best. 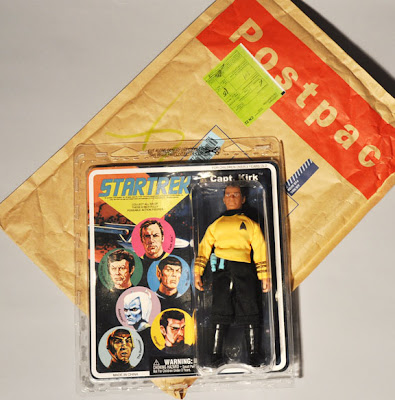 Now I am a little embarrassed here because my dedication to this line of Figures runs a little deep, and I am going to say this upfront, it is an action figure, not a doll any effort by the "plastic only heads" is futile, because in truth any little toy that is a representation of the human, monster or alien (etc, etc.) form is considered a doll, it was the marketers of the 50's and 60's that coined the "action figure" name to sell "dolls" to boys and their parents. So trying to re-write history so you can sleep at night for buying little plastic men isn't going to work Bubba, call it a dolly all you want, you dolly lover!

Okay that said my embarrassment lies in the fact that including this one I now have four versions of this Kirk; I have an original open Mego (we all know you have to have at least one of the holy trilogy if not all three in Mego form), I have an open EMCE toys version (just like this one, but out of the package) as well as a packaged version... and now this one. So I talked it over with LEon and we agreed that a little contest or give away is in order, or I could slap a Harley Quinn outfit on it and send it to Bubba ; )

Anyway we'll work it out and make an announcement so study up on your Star Trek or even Shatner history... oh and when I received this package I could not help but think of this appearance(s) of our great captain.

Enjoy and Thanks again guys!
Posted by chunky B at 9:36 AM

Email ThisBlogThis!Share to TwitterShare to FacebookShare to Pinterest
Labels: batman, collection, in the mail, Star Trek

Truth be told.. they are ALL dolls. But the first ones to be called "action figures" were actually outfitted with cloth clothing.

Glad you enjoyed everything Chunky it was fun sending out a few "extras" to some great bloggers/friends. Wish i had more to send out but who knows maybe later this year or the next.

Hey Brian i was wondering if you were Sentinel3000 or not and now i know. : )

...people say: "is better to give than to receive" & i say: moonshine !!! the happiness is both for the giver & the receiver... talking bout dolls, i don’t mind in to own a pretty Wonder Woman Collector’s doll (& u cannot call her an action figure...) oh & William Shatner takes seriously to mock himself XDDDDD

Nice haul! Yeah, Jboy has really proven himself to me as one of the best fellow toy collectors/bloggers out there. Yet another reason as to why I love our community.

I gotta start sending out some goodies!

Toy collectors are the best peoples! Nice score and nice of you guys to be so giving!

Also, a Captain Harley Quirk would be awesome ;)